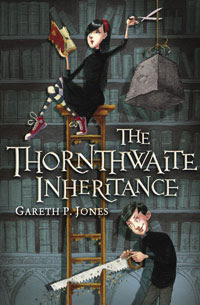 Ovid and Lorelli Thornthwaite have been trying to kill each other for so long that neither twin can remember which act of attempted murder came first.

But whoever struck first, trying to take each other’s lives is simply what they do. Until one day a lawyer arrives at their house to take stock of its contents, and his accompanying son attracts their attention. Soon a new battle evolves – one in which the twins have to work together to solve the mystery of their parents’ deaths.

Can Lorelli and Ovid overcome their old animosities, and will they ever get to finish that game of chess?

I love how The Thornthwaite Inheritance is further described on Bloomsbury's site:

A gothic novel featuring twins with a deadly rivalry, mysterious deaths, a fortune to be inherited and any amount of dodgy dealings.

This is utterly the correct elevator spiel and it works fantastically to sell the novel.

Lorelli and Ovid are two very different kids. I did not expect to like them, at first - I thought they were going to be a bit distant and cold and a bit mean and mouthy, but the author cleverly bypasses that to give us two obviously intelligent characters who are logical, dedicated (to offing one another) and maybe a little spoilt but actually, very likeable in their slightly Gothic and twisted way.

Having said that, they come from a privilidged background as the Thornthwaites are an old noble family. The people in the area do not like them very much due to the trouble previous generations had caused. Lorelli and Ovid are kept almost under house arrest by their servants in the Manor - they are allowed to roam the grounds and they do so, but they have never gone further than the actual village and then it was only briefly.

The cast of characters are kept small and as the mystery surrounding the twins' parents unfold I was at a loss - who was to blame for what? As far as I could tell every single person in the book, bar the twins, had something to gain, not just at the death of their parents (shortly after they were born) but also at the death of the twins!

The author has taken great care to keep the cards close to his chest - it plays out in a classic whodunnit and also a whydunnit way, complete with everyone gathering in the portrait room to denounce each other. But even then things take a turn for the worse as there is yet more to be revealed. In my opinion, a very solid story which would make Sir Arthur Conan Doyle sigh in relief - someone out there is keeping the flame alive!

I sincerely hope that there is more to come from Gareth P Jones about Ovid and Lorelli - they have been perfectly set-up in this for a series of books featuring them both. It is going to be interesting to see how they come to grips with real life when they get to watch tv (they've never seen tv), computers and computer games, food that actually tastes like something (they have always only ever eaten unspiced dull food) and to wear something that's not just black - as the house had been in mourning for fourteen years, since the death of their parents.

An excellent and fun read with just the right amount of sinister to make you feel a bit like you should check your bicycle chain, in case it was tampered with!

The Thornthwaite Inheritence published by Bloomsbury is out now.
Who wrote this? Mark at 9:30 am

I loved it too! Fingers crossed for a sequel!

Sounds like a fun book. I'll have to check this one out!

I'm at a bit of a loss as to what exactly the book is about... But it sounds incredibly fascinating, what I do understand. Thanks for the review!

Great title. Kind of looks like it's in the same vein as the Lemony Snicket books.