Eye of the Serpent by Philip Caveney 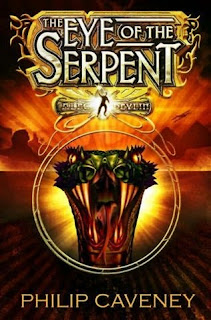 Fifteen-year-old Alec Devlin is on his way to the Valley of the Kings. Accompanied by his faithful valet, Coates, Alec is to spend his summer holidays working on his Uncle Will’s archaeological dig. It’s not the first time he's spent his summer this way . . . but this year things are different.

Uncle Will and his young assistant, Tom Hinton, have recently made an amazing discovery – an ancient tomb hidden deep below the earth. But only hours after opening its doors, Uncle Will falls mysteriously ill and Tom seems to have disappeared without trace.

Together with Ethan Wade, the young American soldier of fortune who is managing the dig in Uncle Will's absence, and a pretty French woman called Madeleine Duval, Alec sets about unravelling the tomb’s mysteries. Seemingly harmless animals have turned into rabid killers . . . long dead mummies are rising from their tombs . . . the spirit of a powerful High Priest is claiming the bodies of the living as his living hosts . . . Together Alec and Ethan must confront a terror that has waited three thousand years to be reborn.
This novel for younger readers really does hold a flaming candle for the action adventure pulp stories from days gone by, recently resuscitated by Stephen Sommers and the Mummy franchise.

Although the novel is aimed at 9 - 11 year olds, the author does not stint on the horror or his storytelling. In fact, it is a little over the top and perfectly pitched to hold your attention.

I did like the main character, Alec Devlin, and am hoping to see more of him. He is one of those intelligent creations that you enjoy reading - he does not become tedious and too good for his own boots and unbelievable in his actions.

The setting of the novel is also well thought out - with the famous archaeologist Howard Carter making a cameo/guest appearance. His discovery of Tutankhamun's tomb in the Valley of the King gives Alec's uncle the perfect excuse to "fly under the radar" as such as the world's eyes are turned on Carter's amazing discovery.

I was quite shaken by the scene which turns Uncle Will insane - not pleasant at all and quite terrifying but I am sure the kids will lap it up. The action and adventure is non-stop and with the amount of creatures attacking Alec and Ethan and the camp, I'm surprised they've not fled for the hills. Especially the bats! - shudder -

One point of great interest to me was how Caveney used language and dialogue to form a clear differential between the English, French and American characters in this book. Ethan's character comes through very well with his use of the words "okay" and other Americanisms. Compare him with Alec's almost formal way of speech and with Ms. Duval's hesitant English, and it makes for interesting reading.

Eye of the Serpent set Alec's character very well for further adventures. The era is also perfect for this "boys own" adventure and I am looking forward to seeing what else Mr. Caveney has up his multi-talented sleeve.

As Eye of the Serpent is one of our Summer Reads I am happy to score it at:

Liz,
Yet another great review!! You're the best :p
Chilli x

Have you read Philip's other books? Sebastian Darke: Prince of Fools is hilarious.

@ Chilli - this is such a fun little book. And thanks for the comps - you are a star!

@Anonymous - thanks for stopping by. I've not had a chance to read them, they are on my tbr pile but I loved the premise of EotS so much, I had to read it first!