We have teamed up with Dave Brendon of Dave Brendon's Fantasy & Sci-Fi Weblog to not only bring you a review of Tony Ballantyne's newest offering - Twisted Metal - but we are also running a pretty unique competition. Check out the details below the review. 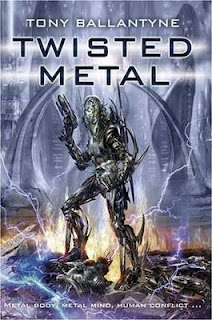 Picture this: you’re sitting at your desk, in front of the PC or with a notepad and a pen, fleshing out the characters for a book you’re writing. Whether or not the characters came before the plot doesn’t matter – you still need to make the characters engaging enough that readers will see themselves in the characters, otherwise the effort is wasted. Been there? I’m still there! ;-) Now, picture this:

None of the characters are remotely human. So how do you go about doing this? How do you create characters that will resonate with readers when those characters aren’t us? Well, let me tell you, Tony Ballantyne found the answer. Somehow.

I was honestly worried about the characters when I picked up Twisted Metal and began reading –I admit that freely; I’m sure you would be, too- but Tony proved my fears unfounded about 3 pages in and I settled down to enjoy an extremely well-told tale with some cool (and creepy) robots.

Twisted Metal: the city of Artemis is expanding, violently so. The philosophy of its people is leading the world into war and death as once-free states fall to the single-minded invaders; they have numbers, they have a purpose, and they will not rest until the whole continent belongs to Artemis – until the whole continent is Artemis. One of the last cities to be targeted by the Artemisian robots, Turning City is the home of free-thinking robots and one special robot in particular. Karel isn’t like other robots – people talk behind his back, look at him strangely, but most respect him. And when Artemis turns its attention to Turing City, Karel will take center stage in a conflict that will lead him to a legend, a legend that might just spell the end of life as robots have lived theirs.

Let’s dive into the book: Tony doesn’t beat about the bush or layer his prose with information – the tale flows so well that you’ll have finished 50 pages before you realize it, and Tony does well to reveal nuggets of info about the characters and their world, so much so that in practically every chapter you find out something new about something you thought you already knew; not only does this bring the world to vivid life in your mind, but it also keeps the tale interesting and fresh. Tony also manages to lead the reader exactly where he wants you to go, and then promptly knocks you upside the head with yet another final surprise that drives the point home: expect the unexpected, and trust that it’ll be cool.

Another reason I enjoyed this book so much was that Tony also makes robots a fresh and interesting concept – these robots are damn cool! They may not be able to stand up to a T800 (then again, they don’t have to) but they are a damn sight more interesting! Yet each robot is also unique, and the concept behind the creation of robots, how they are conceived, is utterly unique, cool and creepy at the same time. Oh, you will also wince in the battle scenes – Tony isn’t afraid to bring the pain!

So, worth a read? Definitely! Everybody is interested in robots, and to be given a glimpse into an entire world of them is something very cool – Tony has ventured into territory unclaimed and uncharted and made it his own, and even if you haven’t read any of his work before (Twisted Metal was my first Tony Ballantyne) and are looking for an interesting new look into what makes SF so cool, original, and immortal, then pick up Twisted Metal; you’re in for a very different, very cool ride!

DB and I have thought about this and we've decided to do the following. There are TWO copies of Twisted Metal up for grabs: 1 paperback and 1 hardback.

Here's what you do: email us with your name and address to EITHER of the following addresses: ours - myfavouritebooksatblogspot(at)googlemail(dot)com or DaveBrendon's email: davebrendon(at)gmail(dot)com. Duplicate entries will be disqualified! Put TWISTED METAL in the subject line. The two winners will be chosen (via Random.org) from the combined list of entires we get. Competition ends next week Friday: 17th July 2009.