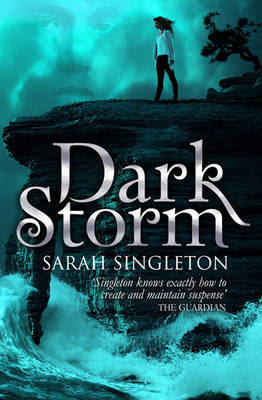 Ellie is staying with her maternal grandparents for the summer, while her recently bereaved dad takes off on holiday with his new girlfriend. Upset by his apparent callousness, missing her mother, and jealous for her dad's attention, she begins to spiral into depression. Her grandparents suggest she joins a local theatre group, to meet people her own age and get away from the dark thoughts that threaten to engulf her. But then she gets roped into a seance at the theatre, and is the only one who actually sees a real ghost. Now a spirit is contacting her from beyond the grave - and as the dead boy's story unfolds, Ellie finds herself falling in love with him. But if she solves his mystery and helps release his soul, will he be lost to her forever?

It seems that Sarah Singleton can't not write creepy books. And there is nothing wrong with this, in my opinion. In The Amethyst Child she explored a young girl getting involved in a cult; In The Poison Garden she gives us a murdery mystery set in the 1850's that kept me guessing right to the end.

In Dark Storm she's given us a haunting romance. I do not use these words lightly.

Ellie is such a complex character, someone who is still struggling to come to grips with her grief over the loss of her mum who died from cancer not too long ago. Ellie and her dad nursed her mum through the illness and Ellie suffers from pangs of depression, doubt and anger at her mum, herself, her dad. She feels that people who see her now, immediately know what she's been through, that her mum's illness and death has somehow left its mark on her. She's also deeply resentful of her dad who seems to have walked away from her and the memories of her mother. He's found a new girlfriend and they've gone on holiday to the States. They had asked Ellie to come along but she couldn't stand the thought of doing that and instead chooses to go and spend her time with her Nan and Granddad at the seaside, hoping to rekindle the memories of going there with her mum.

Ellie is not my favourite person. She still isn't. She seems selfish, self-absorbed and so intensely focused on her own misery, she doesn't seem to notice how her actions are hurting those she loves. The case being her grandparents and her dad. She mopes, she sulks, she's occasionally quite rude. And even though I didn't like her, I did understand exactly where she was coming from, as I too had lost my mum young and so I could empathise with her to a certain extent, but I did also want to shake her and tell her to get over herself, to realise how much she still has to be grateful for. This is a clear indication of a character getting under your skin and for that, I applaud Ms. Singleton wholeheartedly.

It's when Ellie discovers a paper theatre in the local secondhand bookshop and take it home that the weird things start happening.  Someone else writes in her diary and the messages are there when she wakes up in the morning.  Then, when she goes to join the theatre group for their production of Midsummer Night's Dream, that things go into overdrive.  Ellie somehow has a connection to the ghostly boy who writes her notes, who does everything in is power to lure her over to his world.

I wanted to run away when I read certain sections of the book.  Ellie is in such a fragile state of mind, that she falls wholeheartedly for the enigmatic ghost boy who tells her he's waited for her for a very long time.  Their romance is so Romeo and Juliet that it made me well up a few times, but like R&J's story, there are much darker elements than some people may expect.  Ellie becomes so involved in discovering the story about the theatre she has at home, with her ghost boy, with their family history, that she forgets to live in the present.

She looks past her friends and doesn't see them, not really.  Her obsession becomes deeply unhealthy and in part it replaces her grief for her mother.  As Ms. Singleton breaks it down and puts it all back together again, the outcome is not entirely what you may expect, but there is a resolution and parts of it, again, had me sobbing like a girl.

Because of its powerful writing and the exploration of grief in all its forms it's a deeply reflective book but then, it is also about redemption and family and so many more things.  It's a beautiful book in many ways, but it's also a very tough book to read, or I found it anyway, because I think I could identify with Ellie so much.  Another thing I'm now desperate to do after finishing Dark Storm is to have a wonderful UK seaside summer holiday. I'll wisely steer clear of theatres and graveyards.

Dark Storm is out in a few weeks' time, at the end of March and I apologise for reviewing it now, as it is a long lead-up time to the actual release but I just had to get the review out and talk to someone about it.  Even if it is my computer screen.  And also, it may give you a chance to go ahead and read some of Sarah's other fab titles.
Who wrote this? Liz at 10:10 am

I can't wait to read this one. I do like a creepy book. I added quite a few of her previous books to my Goodreads list as I was surprised I hadn't heard of her before.

This sounds like a really interesting read, though I think I'd probably find it a hard-going read.

I really love the sound of this! I've not read any of this authors books but I'm definitely going to add this one to my wishlist!