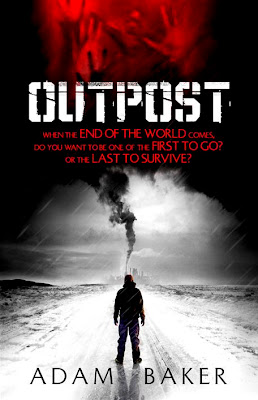 Kasker Rampart: a derelict refinery platform moored in the Arctic Ocean. A skeleton crew of fifteen fight boredom and despair as they wait for a relief ship to take them home. But the world beyond their frozen wasteland has gone to hell. Cities lie ravaged by a global pandemic. One by one TV channels die, replaced by silent wavebands.
The Rampart crew are marooned. They must survive the long Arctic winter, then make their way home alone. They battle starvation and hypothermia, unaware that the deadly contagion that has devastated the world is heading their way..
Outpost was one of a handful of books I picked up after Christmas courtesy of some very welcome gift vouchers. I like dystopic/ apocalyptic stories, and the premise was an intriguing one (the great opening line helped too) and while it took me longer than expected to get a chance to read it, in retrospect the timing was good as I finally got stuck in as an unexpected cold snap hit us.
Outpost opens with a suicide bid by what will be one of the main characters, and the tension begin to trickle in almost immediately afterwards as news of the worldwide pandemic finally filters through to the rig. The information that comes through is sketchy, and not knowing what is actually happening out there keeps you from pigeonholing the story and adds to the atmosphere.
Suffice to say that things start going awry sooner rather than later, more often than not due to very real, very human fears, all accelerated by dwindling food supplies and the first terrifying and bewildering encounter with the reality of what is waiting out there. Hard decisions need to be made as conflict tears the crew apart, and while there are some solid action sequences, the real impact comes from the conflict between the characters and the slow implosion of their hopes and dreams in the face of the utterly bleak and alien future that awaits them.
Outpost surprised me at several turns, evolving as it did from the expectations of a survival-horror into the sinister lovechild of The Thing and 28 Days Later. As a debut novel it punches way above its weight, and Adam Baker is certainly someone to keep an eye out for in the future.
Liz says: I read this one before Mark and was smitten by the slow creeping horror of the story, about how this handful of survivors would survive. It's a slow burning psychological thriller that freaked me out. In fact, it took me ages to finish it, after the initial rush of reading more than two thirds of the book in a day. I wanted to believe that everything was just an awful dream. Needless to say, it wasn't. Adam is definitely an up and coming horror writer and one I'm looking forward to reading more, specifically in Juggernaut, his 'prequel' to Outpost.

This sounds great though I think I might wait for a nice sunny summer day before I think about reading it!

Reading this now and hoping a great movie will be made from this awesome story.