Very thrilled to have David Tallerman chat to us about Easie Damasco and what went into creating him as the main character in Giant Thief:


Kicking From the Sidelines

I've never thought of my - let's just say protagonist - Easie Damasco as a hero, or for that matter as an antihero. Over the course of my debut novel Giant Thief, he certainly does some heroic things, but also some completely despicable deeds, and often in close succession. Mostly he tries to stay alive, using whatever resources are available. It that means stealing a giant then so be it. If that means abandoning said giant, or drugging a friend, or robbing a palace full of nobles then likewise.

The thing is, I've always let Damasco choose his own path as much as possible. Right at the beginning, he had a few fixed character traits, most of them defined by the role I knew he'd be playing. He was a thief. That meant he didn't have too much of a conscience; at least, not the kind of conscience people who don't habitually steal things have. I knew he was going to have off with a giant and some other choice treasures too, and I knew he'd be taking them from a uniquely dangerous individual, which meant he was impetuous to say the least, with a knack for getting into trouble. I knew a tough-as-nails hero would have just stabbed his way out of there instead, which meant Damasco was a talker not a fighter.

At the start of chapter one, I took those basic ingredients, thrust his neck into a noose, and more or less figured things out from there. I'd be lying if I said Damasco wrote himself, because things are never that easy, but it didn't take me long to gain a sense of how he'd react and what he'd say in any given situation. For the former, thieving, running away and betrayal tended to feature high on the list. For the latter, wisecracks and sarcasm were a safe bet. Often, the difficulty was in remembering that there was a little more to him than that ... that like most people, Damasco was capable, in the right circumstances and given the right motivation, of behaving like a semi-decent human being.

As for the nurture side of things: Well, Damasco's back-story, so much of it as is revealed in Giant Thief anyway, could be written on the back of a large postage stamp. Giant Thief is his tale, after all, and it only seemed right he should tell it his own way. If he's cagey about his life before the opening chapter, can you blame him? When you've been stealing since you were introduced to long trousers, maybe some things are better left unsaid. What Damasco has is not so much a past as a history of trouble. He's been run out of most everywhere and offended most everyone. He makes enemies far more easily than he does friends, and people tend to remember a name like "Easie Damasco."

One last thought. Looking back, the thing I find most interesting and fun about Damasco is that, though I described him as a protagonist at the start, he actually fits far more readily into the role of sidekick. He's hardly ever the one to push the story forward. More often he's trying to derail it, or get out from under it in one piece. The real protagonists of Giant Thief are Moaradrid, the warlord whose lust for power and revenge thrust Damasco's world into chaos, and Marina Estrada, the brave small-town politician who sets herself up against Moaradrid when no one else is willing to.

But then, I like the idea of characters who watch a plot unfold from the sidelines, especially ones with big mouths. And as much as Damasco frequently misses the point or just plain ignores it, he does have one clear advantage: he sees everything and everyone in shades of grey. He's no more taken in by heroism than villainy, he's always looking for the angle and it takes a lot to make him see anything as other than enlightened self-interest. His take on events might not be the most complete or the most honest - and Giant Thief would certainly be a completely different story if either Moaradrid or Estrada were doing the telling - but I'm not sure Easie's version is any less the right one for all that. 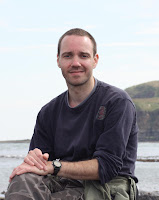 David Tallerman was born and raised in the northeast of England. A long and confused period of education ended with an MA dissertation on the literary history of seventeenth century witchcraft that somehow incorporated references to both Kate Bush and H P Lovecraft.


David currently roams the UK as an itinerant IT Technician-for-hire, applying theories of animism and sympathetic magic to computer repair and taking devoted care of his bonsai tree familiar.

Over the last few years, David has been steadily building a reputation for his genre short fiction and increasingly his writing has tended to push and merge genres, and to incorporate influences from his other great loves, comic books and cinema. David’s first novel, Giant Thief, was published in January 2012, with two sequels to follow.

His debut novel - the Leiberesque Giant Thief - is available now from Angry Robot.