Know No Fear by Dan Abnett 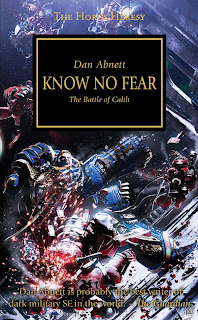 Unaware of the wider Heresy and following the Warmaster’s increasingly cryptic orders, Roboute Guilliman returns to Ultramar to muster his Legion for war against the orks massing in the Veridian system. Without warning, their supposed allies in the Word Bearers Legion launch a devastating invasion of Calth, scattering the Ultramarines fleet and slaughtering all who stand in their way.

And so begins the 19th book of the Horus Heresy series.

The first thing you notice is that KNF is presented in the style of a chronicle of the battle of Calth rather than an out-and-out novel like its predecessors, the heading of each chapter showing the countdown to when Guilliman, Primarch of the Ultramarines, gives the order to return fire. It’s a very clever device, adding to the tension as the Word Bearers make their final preparations amidst the unsuspecting Ultramarines who are denied the reader’s knowledge. It’s a bold move, perhaps borne of the fact that the subheading on the cover is ‘The Battle of Calth’, or that ultimately the entire Horus Heresy is a retrospective study of what shaped the 41st millennium into the no-hugs-just-war hellhole that the rest of 40K is set in. Whatever the root of the idea, it works. This is a huge confrontation, one that ranks right up there with the Dropsite Massacre in terms of impact, and it deserves the epic tone that this approach gives it. It’s tricky to put exactly why and how it works into words, but it does (hence Dan being the NYT bestselling author and not me).

It’s a hybrid approach, made up of varying percentages of found footage, military report and typical third person narrative, and what that does is enable Dan to convey the sheer scope of the battle while seamlessly blending in the facets of the battle from the perspective of a range of Space Marines and troopers scattered across the battlefields. Through their eyes we are afforded a glimpse of uncounted moments of otherwise unseen heroism and bear witness to their deaths. The scope and intensity of the unadulterated violence that is unleashed is no less than awesome. There’s a very real sense of how utterly lethal and unforgiving a battle between Space Marines would be. You can tell Dan was having some real fun with this, and has really pulled the stops out in the action stakes; it’s crisp, dark and relentless, and reaffirms why he’s the crown prince of military sci-fi.

The stars of the show are the Ultramarines and how they react to the invasion as they’re steadily pushed to the brink of destruction. It’s a good insight into their psyche at that time, and an interesting take on how they assess and deal with such threats. Guilliman too gets a similar treatment, and while he doesn’t get as much attention lavished on him as, say, Corax did in Deliverance Lost, he’s nonetheless fleshed out and given more character. And he swears. I hooted with childish glee when Lorgar resorts to calling him a “giant pompous arsehole”. Thank you, Dan. They’re Primarchs. Soldiers, albeit on a scale we can’t really appreciate, but they’re not saints.

KNF clocks in at a respectable 412 pages and is a novel of epic, brutal proportions. I finished it over two days of commuting, including two jealously guarded lunch hours where I sat transfixed by blood, betrayal and heroism next to my cold and forgotten coffee. To say that I enjoyed it is an understatement, and my only complaint is that I want more.

You can watch the trailer here, read an extract of KNF here and visit Dan's blog here.
Remember that Dan will be at Games Workshop Plaza, Oxford Street on the 18th Feb (starting at 12 noon) where he'll be signing of Know No Fear!
Who wrote this? Mark at 8:00 am