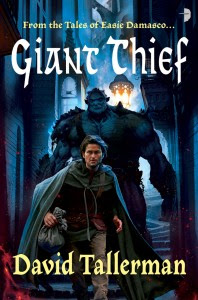 
Even the wicked can’t rest when a vicious warlord and the force of enslaved giants he commands invade their homeland. Damasco might get away in one piece, but he’s going to need help.

I had such fun reading Giant Thief. It is the equivalent of a Sunday Matinee movie, it's a popcorn book, the kind of fantasy you give a friend who has never read fantasy and wants to give it a try. It's easy on the eye, the characters are immensely likable and the story sweeps you along.

By no means is this a mad George RR Martin style sprawling fantasy epic which feels like it will never end, no - the key here is that the author has given us a chase book, albeit in a fantasy world, and after an initial wobble where the chase scenes become a bit dull, we find a narrative full of great world-building and interesting characters, but he reigns in all the exposition, which gets many votes in my book. See, Easie (best name ever?) manages to steal something from a Very Bad Man. And of course, the VBM wants it back. And he has an entire army to throw at Easie. And so Easie does something rather unexpected, he steals a giant. One of the giants from the VBM army, to boot.

You are never in doubt, for a single second, that Easie is trouble. The first line of the book tells you this - The sun was going down by the time they decided to hang me- and as he goes on the run with the giant Saltlick, I fully expected him to become more disagreeable and unpleasant. I was ready to dislike Easie, I was ready to dislike the story. But what won me over, after the initial running and hiding from the VBM's army, was the developing relationship between Saltlick and Easie. Easie is selfish, self-absorbed and you know that he'd sell his best mate in a twinkling of an eye. And yet, there is some spark in Easie that you can't help but like. He is the unreliable guy you can't help but like, because you think that deep down he's a good guy gone wrong.

The author plays a very delicate game, showing us that Easie is not to be trusted, and yet we do place our trust in him, because he saves the cat.

There is action aplenty and great dialogue and by the time I had finished reading it, I wanted my own Sallick and was ready to start learning how to pick locks and creep about in the shadows.

Cinematic and cool, Tallerman gives us a fun, fast debut where old fantasy tropes are dusted off and given a newer sheen for a new audience, ones who may be put off by giant-sized fantasy epics, but who are keen to try summat smaller in size and scope.

Giant Thief is out now from Angry Robot in book and digital format.
Who wrote this? Liz at 9:00 am