The Coming of the Dragon by Rebecca Barnhouse 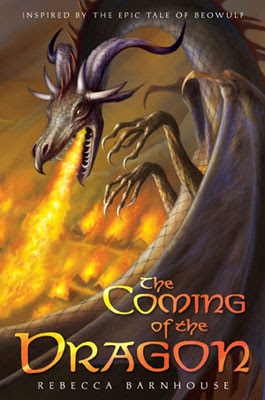 When he was a baby, Rune washed up onshore in a boat, along with a sword and a pendant bearing the runes that gave him his nickname. Some people thought he was a sacrifice to the gods and wanted to send him right back to the sea. Luckily for Rune, King Beowulf disagreed. He lifted the boy from the boat and gave him to Amma, a wise woman living on a farm far removed from the king's hall, to raise as she saw fit. Sixteen years later, Rune spends his summers laboring on the farm. And at King Beowulf's request, he comes to the hall each winter for weapons training. But somehow he never quite fits in. Many people still fear he will bring a curse on the kingdom. Then a terrible thing happens. On a lonely crag on a mountain that belongs to the giants, someone awakens a dragon. It is time for Rune to find the warrior inside himself and prove to the doubters once and for all that he is a true hero. For Fans of Christopher Paolini, Tamora Pierce, and all coming-of-age fantasy.

I am a fan of Beowulf and my rather tattered and much read copy of this bit of amazing literature translated by Seamus Heaney is proof of that. I have got various permutations of the poem in literary and movie form and I have to say that The Coming of the Dragon is one of my favourites.

Rebecca Barnhouse wastes no time setting things up - we are on the beach with Amma and a group of women when the tiny boat washes on shore with its unusual cargo: a small boy and a big sword. The community is divided: send the boat back into the arms of the gods or raise the child. King Beowulf arrives on time to prevent the all-out murder of the child and gifts him to the strangely silent Amma, saying that the boy is a gift of the gods and to return it to them would anger them.

Amma raises Rune with care, teaching him lore and ancient songs. Rune grows strong and tall and is bullied by others his age and some adults, because he's different. But it's when Rune wanders off in search of their goat, and he comes across a sly man hiding in the mountains and subsequently sees the dragon, that things spiral out of control.

He's treated with suspicion and people accuse him of waking the dragon and for the destruction and death of family members and farmland. Beowulf doesn't stand for this and is decisive in his actions, championing Rune for being brave in the face of a creature that would make most people die of fright on the spot. But Beowulf is keen to hunt down the monster, remembering the days of old, when he slew Grendel and his mother. He craves once again for that action and adventure, for the skalds to sing new songs about him.

The dragon rampages around the countryside, killing people and laying waste to farms. It's almost as if he is taunting them. The locals discover the stranger in their midst, the one Rune saw in the mountains and they quickly realise that the stranger snuck into the dragon's lair and stole a goblet, waking the dragon from his slumber.

And of course, a group of warriors decide to accompany Beowulf on the hunt for the dragon and Rune is left behind, more out of thoughtlessness than anything else.

In a story that runs closely to the original telling. The Coming of the Dragon, is so well written and so unabashedly fun to read, that I found myself nodding and forgetting how the original epic went. The author manages to give us a snapshot of what it's like living in that era, the work that has to be done, the sensibilities of the people in the community but also how outsiders are regarded and how superstitious the people of the day were. She also shows us plainly how Beowulf's actions have political impact in his own country but how his kingdom is perceived from the outside and how actions can be interpreted both ways.

As the book nears the end, things heat up in more ways than one and Rune is placed in a position of power he initially has no idea how to cope with. As his own history is revealed and he realises who Amma was and how their lives were bound to intersect, he realises how the gods played with his life. And how he has to stand strong and look to his friends and comrades in arms for support but to trust his own inner believes that Amma took such great pains to instil in him.

I had great fun reading The Coming of the Dragon and would highly recommend it for younger readers maybe 9+ who are adventurous and who enjoy strong characters and well written stories with a mythical historical slant. Having said that, I am sure that older teens will pick this up and swoon a bit over Rune who has such an impressive character arc laid at his booted feet. I think there is a bit of everything here for almost any age and it is definitely a worthwhile addition to any Beowulf fan's collection.

Find the author Rebecca Barnhouse's website here. The book was published back in 2010 by Random House in the US and I got my copy from Amazon at the end of last year in a big book splurge.
Who wrote this? Liz at 7:43 am

Great review. I've somehow managed to get through life so far without ever reading or seeing an adaptation of Beowulf... I probably need to do something about that.