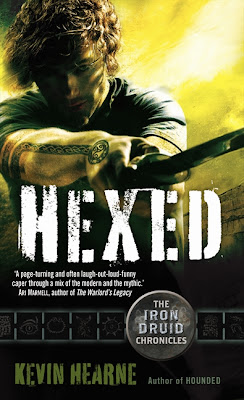 Atticus O’Sullivan, last of the Druids, doesn’t care much for witches. Still, he’s about to “make nice” with the local coven by signing a mutually beneficial non-aggression treaty—when suddenly the witch population in modern day Tempe, Arizona, quadruples overnight. The new girls are not just bad, they’re badasses with a dark history on the German side of WWII.

With a fallen angel feasting on local high school students, a horde of Bacchants blowing in from Vegas with their special brand of deadly decadence, and a dangerously sexy Celtic goddess of fire vying for his attention, Atticus is having trouble scheduling the witch-hunt. But aided by his magical sword, his neighbor’s rocket-propelled grenade launcher, and his vampire attorney, Atticus is ready to sweep the town and show the witchy women they picked the wrong Druid to hex.

How much do I love Kevin Hearne's Iron Druid Chronicle series? *stretches arms at least six metres wide* About this much.

Atticus is a great main character.  He's charming, deeply funny, sarcastic, intelligent and feels genuine.  He's a bit of a bad-ass, but he never comes across as over-powered in this world he inhabits.  His enemies are always just that bit stronger than him, that bit more dangerous, which is why your sense of disbelief remains suspended, always.  He gets beaten up loads, but like all good heroes, he just doesn't lie down and die.

He gets up, he gets mean and he fights back.  I like that in my heroes.  He also isn't afraid to ask for help.  Which is another thing I liked.  He screws up plenty and his interactions with various fae and supernatural creatures feels real and we come away with a sense of awe when he encounters various gods and goddesses.

But importantly, he makes these mythical beings feel human, so that we can see them stripped of their godhood and identify with them.  One of my favourite scenes from Hexed is when he teams up with Coyote, the quintessential trickster god.  Atticus is completely convinced that Coyote's on the level and they work together well, yet when at the end of sorting out the trouble at the high school it's revealed Coyote basically used him, he is a bit stunned.  This I approved of, because it showed off Coyote's trickster nature, but it also showed some of Atticus's naivete and it makes him even more real and easy to identify with.

Another thing I love about Kevin Hearne is his writing style.  There is nothing about it that drags.  It's fast paced, incredibly well written and researched.  The mythologies are close to the originals we may read up in more scholarly works and yet he's given it a unique spin, keeping it fresh and will probably lead to readers picking up dusty mythology books to find out more about the creatures he references.  What I also like is how unforced his dialogue is.  It is easy on the eye and if you look carefully, you pick up the nuances that help define the various secondary characters.

Again, there will be the inevitable similarities drawn between Jim Butcher and other urban fantasy writers, but so what? The Iron Druid books are great fun and I find myself thinking about the two I have read in retrospect and smiling to myself because I've enjoyed them so much.  My only quibble is that well, that I'm a bit jealous of Kevin Hearne.  He's done what all good writers can do: given me a hero I genuinely like and secretly wish was real.  His world-building is never intrusive and some readers who like denser titles like Gaiman's American Gods may sneer at the "lightweight-ness" of the Iron Druid books but you know, if you've liked Gaiman and Carey and Butcher and Aaronovich, you're going to love Hearne.

I cannot wait to get Hammered and the rest of the titles he's recently signed a contract for.  I'm a fan and I don't care who knows it. For aspiring writers of the urban fantasy genre, I recommend reading these books to give you a good grounding in how to do it right.  For fans who are already fans of the genre, try them!

The first three titles are out now: Hounded / Hexed / Hammered, with Tricked coming in April. Find Kevin's website here and do tweet at him on Twitter at @KevinHearne.
Who wrote this? Liz at 8:29 am

I have to admit just the cover was enough to sell this book, and series, to me, but then your review sealed the deal. Atticus certainly sounds like my kind of leading man!