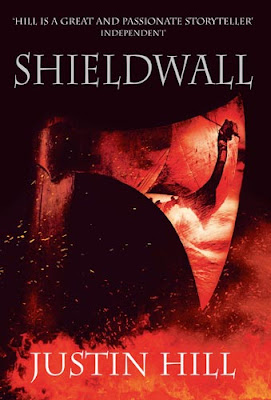 The year is 1016 and England burns, while the Viking armies blockade the great city of Lundenburh. King Ethelred lies dying and the England he knew is dying with him; the warring kingdoms of Mercia, Wessex and Northymbria tremble on the brink of great change. One man lives to bear witness to the upheaval: Godwin, barely out of boyhood and destined to become one of his country's great warriors.
Shieldwall is, of course, Godwin's story although it begins with his exiled father rather than him. Wulfnoth is steadily becoming aware that his strength and life are destined to fade before he can lay his eyes upon the son he was forced to leave as a hostage many years before. As he lays dying, he commands his war band, all tough and grizzled fighters, to seek out Godwin and serve him.
The story loops back then to introduce us to the Godwin, and so begins a journey into a turbulent period in England's history that has long been overlooked amidst the more glamourous and accessible Hastings. The hardback clocks in at just under 400 pages, and crammed into that are decades of warfare, betrayal and a desperate struggle see the dream of a better future bartered away by lesser men, all filtered through Godwin's perceptions. He's an interesting character, a realist who refuses to surrender his ideals or honour even in the darkest hours. The world he and his band occupy is not an easy one. People starve, wounds get infected, heroes piss their breeches. It may be fiction, but it sure isn't fantasy. The action is vivid and brutal -and there's plenty of it to go around too.
My only complaint per se, and I expect that it's a by-product of the sheer scope of the novel, is that there was a bit in the middle where I started to feel a bit distanced from Godwin. Things that I would have liked to have been 'in on' are fleetingly spoken of or referenced in retrospect, including an incident where one of his closest childhood friends was killed. It takes the focus off him and slows the pace a bit, but it's minor wobble, a deep breath before the plunge towards the showdown with Knut. 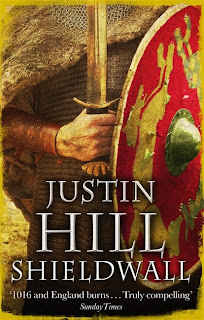 The Abacus cover - due c. 06/2012
For me this is historical fiction of the best sort. Hill has blended fact and interpretative fiction to bring an almost forgotten bit of history and the players therein to life in an immersive and taut novel, shot through with an evocative poetry that echoes the sagas of the time. It's a great read.
I enjoyed it immensely and have found it a home on my shelves next to Giles Kristian's Raven series.

You can visit Justin's blog here.
(And this is how not to charge a shieldwall)
Who wrote this? Mark at 8:00 am

This sounds really good! It's been a long time since I read a historical story like this that was a good length. Sounds like a good book to take away on holiday.