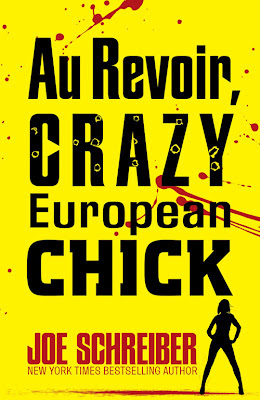 Ferris Bueller meets La Femme Nikita in this funny, action-packed young adult novel. It's prom night--and Perry just wants to stick to his own plan and finally play a much anticipated gig with his band in the Big Apple. But when his mother makes him take Gobija Zaksauskas--their quiet, geeky Lithuanian exchange student--to the prom, he never expects that his ordinary high school guy life will soon turn on its head. Perry finds that Gobi is on a mission, and Perry has no other choice but to go along for a reckless ride through Manhattan's concrete grid with a trained assassin in Dad's red Jag.

So they call this a mash between Ferris Bueller and La Femme Nikita...and it is maybe a bit, but it is far more like Collateral.

Oddly, if you are a teen you probably have no idea what these movies refer to as it's unlikely that you've had the chance to watch them.  Unless your parents give you free reign about what to watch and don't particularly care about violence (talking about Collateral here especially).

ARCEC is violent.  Gobi (confusing name for me as obviously there is the GOBI DESERT) is an assassin, a killer, not entirely a pleasant person.  We understand where she comes from, eventually, but by dragging Perry into this nightmare of hers, she's not really kickass - she's just a selfish adult taking advantage of a  much younger boy.  She has no qualms shooting people in front of Perry, of beating up others and forcing Perry to act as her getaway driver.

I thought I liked the book, but as I closed the pages and sat down and thought about it more, I realised I had a definite issue with Gobi and her behaviour.  I liked Perry, I liked that he developed lightly as a character and grew a pair of cajones to stand up to his dad, even if it was as the bullets flew.

ARCEC is fast paced, action filled with a through line of revenge, no matter what, at no matter what cost. There is swearing and violence - a lot of it and although it is gratuitous, it makes sense within the context of the story, however, now distanced from it, I unfortunately have issues with it.

I can actually imagine a younger Matthew Perry squealing his way through this in movie format which is unfortunate as I really do not like Matthew Perry.  Matthew Perry or those two gormless boys, Jesse Eisenberg or Michael Cera - and sadly it really put me off.

There are moments of genuine humour, macabre at times, but my level of disbelief whilst reading the book was easily suspended but again, when considering everything that happens and thinking about it after the fact...the messages to the reader here aren't particularly clear or pleasant. It's okay to take revenge on a bunch of killers and involve innocent people in it.  It's okay to threaten to blow up a home with defenceless innocent people and generally cause the death of people around you, all to get to your goal.

Although Perry, our teen protag, makes it out alive on the other side, it's too glib, too easily sorted out.  He is not held accountable for any of Gobi's actions and in reality, he would have been locked up and no one would have heard from him again.  Gobi is a psychopath and is portrayed as a cool, diminutive, assassin who does everything she does to help Perry come out of his shell whilst she forces him to be her driver on a wild night of assassination and killing.

I'm actually really annoyed by this review - I'm sorry.  I genuinely liked the book whilst I read it but again, I think thinking back about it now, maybe not so much.  There is some very mature content here, it's quite amusing in a very black and dark way, so I think it will have cross-over appeal into a snack-sized book for adults who like fast paced thrillers.  It will also translate well onto screen and it reads like a novelisation of a movie, so no doubt we'll see something about it soon enough. Ah yes, IMDB tells me the movie is in development.  Hmm.

I'm sorry, I would have liked to be excited about this.  I'm not squeamish and I definitely don't dislike explosions and death in my books, no matter what age, but somehow, it just didn't work in this one.  I'm clearly in the minority here, as it seems the peeps over at Goodreads really liked it as did my mate Darren at Bookzone!

At the end of the day, it's a marmite thriller - you're either going to love it unconditionally or it's going to stick in your throat and make you feel vaguely uncomfortable and a bit sordid.

Good review. I often change my mind after reading a book. But I am totally squeamish so guess I'll give this one a miss.

I'm a squeamish reader, too, but thought that the humour helped balance the gore in this one. If it had been straight action or crime, though, I might have felt differently--I can't usually handle those genres.