The Táin by Liam MacUistin 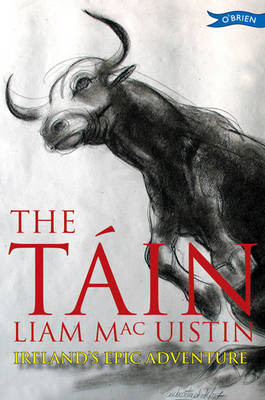 Firstly, I am a sucker for books on folklore and mythology. Below is a photo of some of the books I own. I probably have triple this upstairs on my landing, excluding my fairy tale books.  Myths and folklore is what shaped me as a reader and aspiring writer.  I can't ever get enough of the stuff.

When O'Brien Press in Dublin offered me a copy of The Táin to review, I of course said yes.  The first time I came across this sequence of stories was whilst reading Morgan Llewellyn books as a teen in South Africa.  They really inspired me and lead me further to exploring Celtic, Irish and Scottish mythology.  From there, my hunger for mythic tales from all around the world just expanded and grew.

So, more than anything,  I have The Táin or rather Táin Bó Cúailnge / The Cattle Raid of Cooley to blame for sort of, starting it all.

The most famous Irish legend of all in an exciting and easily understood version. Read about the feats of the famous warrior Cuchulainn who singlehandedly defends Ulster against the army of Queen Maeve. War, peace, love, greed, fate are the stuff of an epic, and in The Táin they are present in full.

Illustrated throughout by Donald Teskey.


Before I even attempt a review, look at this piece of artwork from the book: 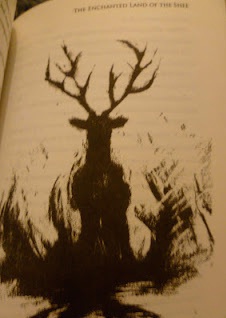 Strong imagery abounds - the illustrator had his work cut out illustrating a book as rich and diverse as this.  Instead of falling into a confusion of imagery, Mr. Teskey instead opts to give us a series of simple yet strong and defined line-drawings and sketches that enhance this complicated story.

The author, Liam, has excelled in taking a relatively intricate narrative, with all its quarrels, petty squabbling, mad battles and rivalry and rewritten it for a modern audience.  He's retained the epic scale of the story, the strangeness of these mythic characters, the overall oddness of the story - really, who would go to battle for years to get ownership of a bull?? - and added a few deft touches to make the characters relatable to us, as modern readers.

We are given the background of how the Maeve, The Warrior Queen of Connacht fought with her husband Ailill about who was the wealthiest and how she went ahead to try and best him and the consequences of that.  We meet Setanta as a boy, before he becomes the Hound of Ulster and we learn what makes him tick and subsequently how he got the name he is probably better known for Cuchulainn.

The story strands Liam tells us weaves in and out of the main narrative that makes up the The Táin - we are introduced to the other players in the narrative and we get a pretty good grasp of who is who and what makes them tick and we are shown how loyalties shift between friends and erstwhile comrades.

The Táin bring home and makes fresh and new an ancient story that can easily become staid and dull because readers may know it, or think they know it.  I thoroughly enjoyed lying back on the couch with my giant cup of tea and reading it.  I loved spending time with the Hound and Maeve and Connor of Eman Macha.  The Táin is rich myth storytelling that inspires, makes you smile, makes you shake your head and most importantly, want to visit your local library to find more.  And that, in my opinion is what good books do - they make you want to know More.

The Táin is out now from O'Brien Press and you can read the opening chapter (and see more artwork) here.

Looks gorgeous. I have the Thomas Kinsella translation with those ink drawings by Louis le Brocquy. Also discovered while googling idly after reading your post that the Decembrists have done an EP based on the Tain!

I love the look of this book, I am fascinated by illustrations in book. Personally illustrations can be like pieces of artworl. I recently read The Book Thief and loved the illustrations in that book. It really made the book stand out from everything else I had read. The story of course was brilliant and I would recommend it.