Warning: this is a long rambling blogpost. Also, it contains pictures of stuff and I tell you about this guy called Andy Robb's book launch I attended last night.

In the meantime, the first part of the blog:

Mark, Sarah and I are geeks. We may not be geeks about the same things, but by Lord Vader's breathing apparatus, we are geeks to the max.

Sarah has a thing for Harry Potter books and paraphernalia and chickens. Oh, and Star Wars, lets not forget her talking at me in Yoda-voice giving sage advice. Even by email.

Mark can talk your ear off about David Gemmell and Druss the Legend and he knows about archery and fencing and sword fights. He knows various schools of magic and what critical stats are for most RPG games.

Me? My thing is Sandman, Supernatural, fairy tales and movies and books. Also, stationery. I am also an enabler. It is my superpower, I think.

So, with the help of my rather shoddy iPhone, I walked around our tiny TARDIS house and took photos of the obvious geek things Mark and I have on display.

Here is some of the stuff we've got. 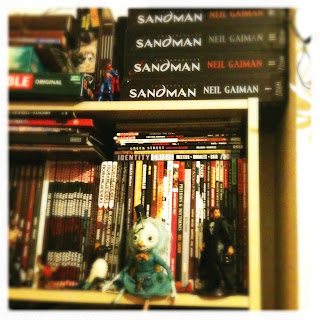 My Sandman collection. Some of our comics too, along with a good view of the Punisher maquette and my Alchemist Unicorn from Filligree. 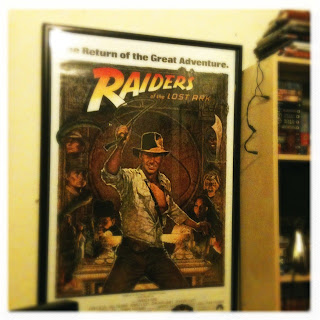 The best movie Spielberg ever made. In fact, the ONLY Indiana Jones movie in my opinion. Although Crusade was good fun too. 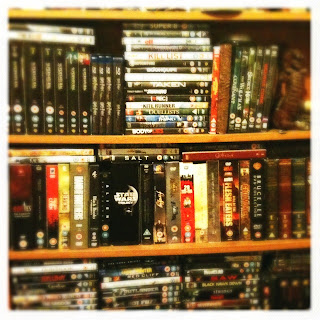 Some of our DVDs - zombie flicks, Star Wars, Supernatural - the usual suspects. 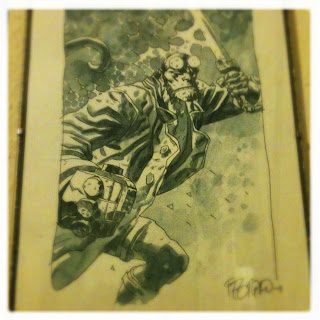 My favourite item in all the world right now - watercolour of Hellboy by the amazing Duncan Fegredo. Isn't it just gorgeous? Again with the Punisher - this was commissioned by Mark from Lawrence Campbell whom we are both BIG fans of. 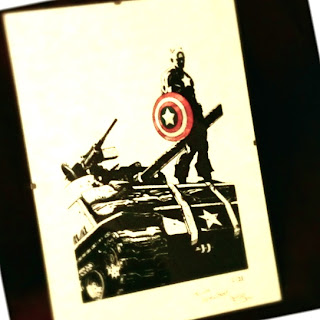 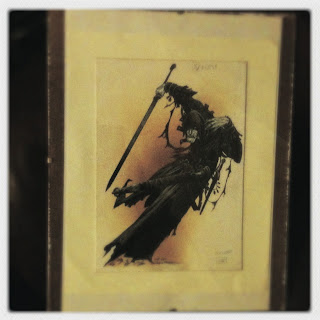 This is a piece of original art Mark and I bought at one of the GenCons we attended years ago now. The artist is Wayne Reynolds and Mark and I tend to have impulse issues when it comes to buying Wayne's artwork. This bit of art appeared in one of the newer editions of the D&D Monsters Manual. And yes, we may be bragging. 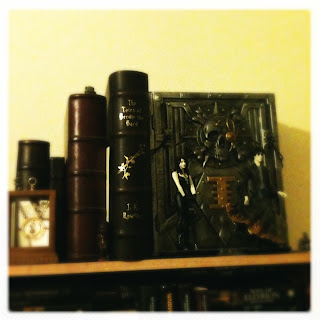 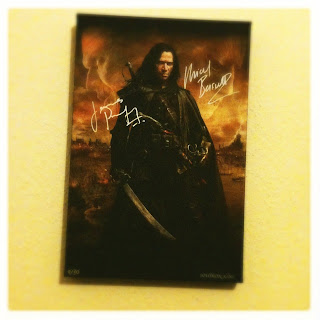 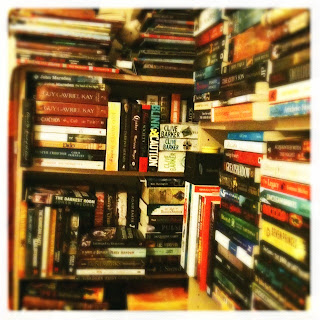 Two partial shots of two bookcases...
Now for the second yet important part to this blog:

Last night I attended the book launch of Geekhood by Andy Robb. Now, I've not yet read the book, but I will, and this blogpost was initially supposed to be US vs ANDY when it comes to geekery but things got a bit mad, so instead I give you a pictorial of the evening. 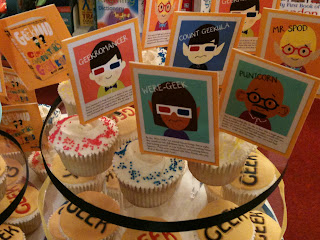 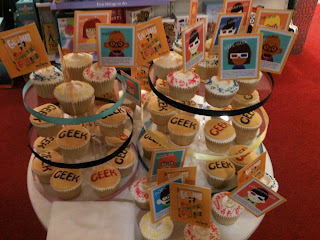 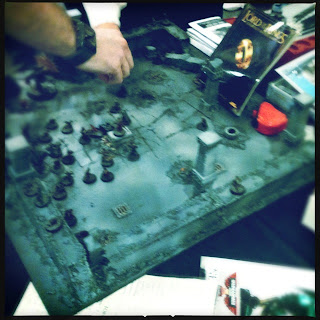 The Games Workshop in the Plaza on Oxford Street kindly set up a display and taught some excited kids how to paint miniatures. I didn't have a chance to show them prowess. This saddens me. 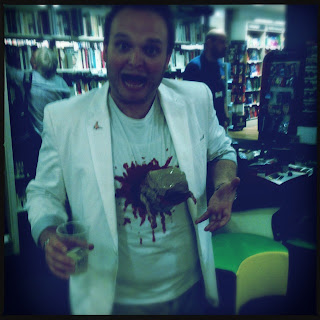 This is Paul Black, the publicity person for Stripes Publishing. Yes, my friends, that is indeed a chest burster from Alien. There just aren't enough words... 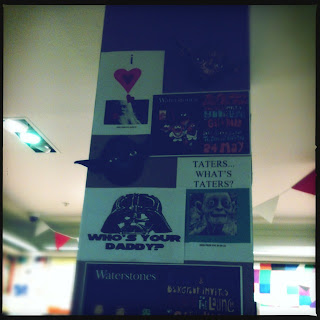 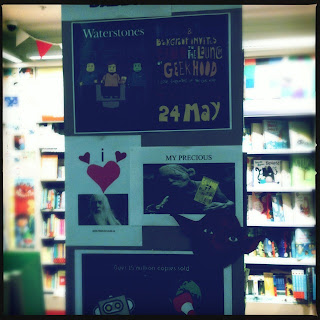 Some great posters Andy and the team from Waterstones Oxford Street Plaza set up. Philip Reeve and Sarah MacIntyre once again getting into the swing of things. 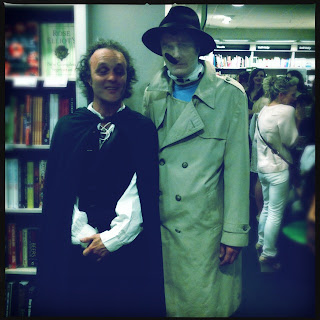 Andy (author and Hobbit impersonator) and his mate and "meta-reader" Rorschach from Watchmen-fame. Sadly, I do not remember R's real name. 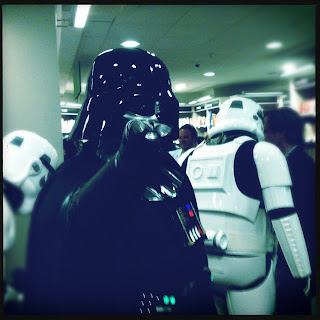 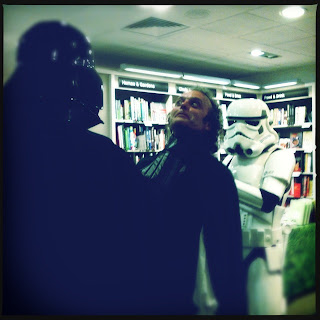 Yeah, Andy tried cheeking Lord Vader and the old mouth breather just wouldn't have it. Poor Andy. He will be missed. 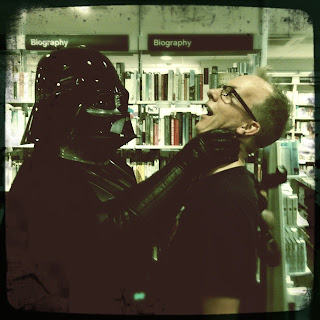 I am sure you've been threatened by me before, Lord Vader demands of a Waterstones employee. Employee too stunned to reply. 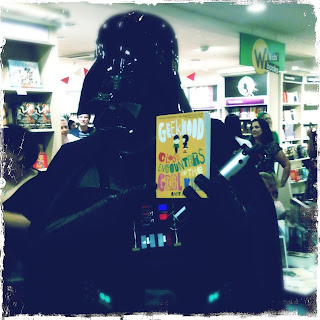 Lord Vader proves how easy product placement can be done. 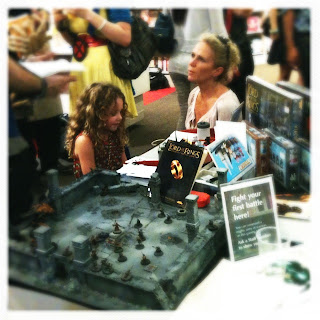 Mummy, I want all these little men to come home with us so I can forge battle against the minions of the Dark Lord. And then I want my own axe. 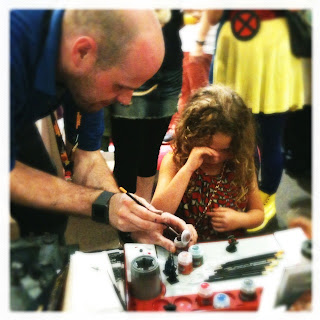 No, sweetie, painting Orcs pink is not how it's done. Okay, maybe you can paint Legolas pink. He is the prettiest elf, after all.
As you can tell from the photos, everyone had a superb time. I can't remember the last time I laughed so much at a launch. Everyone who came dressed up did such a good job - I was in awe. We wish Andy the best of luck with Geekhood and we look forward to reading it.
As for Geek Pride Day today: we are all geeks at heart. Some wear it more openly than others, but it is there and dammit, today is the day to be proud but more than that, it should never be something to be ashamed of. Own it, my friends! 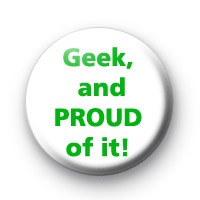 Sarah here and just to add to Liz's fantastic post that I read this just after putting up my new Deathly Hallows framed poster. Sorry for the bad photo but there - it proves the point. No hope for me there is. Sorry, I did just do that :) 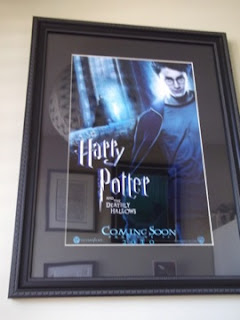 That is all kinds of AWESOME.

This is such a brilliant post, both halves of it :D I love the wonderfully varied ways that the three of you are geeks! And last night's party looks like it was brilliant.

Love it - can we all have t-shirts with Geek & Proud on please :D

This is a great site! Thanks!