Dying to Know You by Aiden Chambers 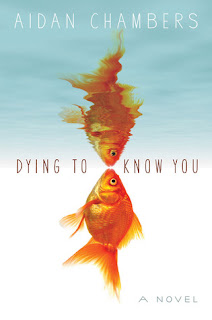 Synopsis
In Dying to Know You, award-winning author Aidan Chambers has created an indelible portrait of a young man discovering his own voice in the world, and has constructed a love story that is as much about the mind as it is the heart.
In this contemporary love story, a teenage boy named Karl enlists a famous writer to help him impress his girlfriend, Fiorella. She has asked him to write her a letter in which he reveals his true self. But Karl isn’t convinced he’s good enough with words, so he tracks down Fiorella’s favorite author and begs him to take up the task. The writer reluctantly assents, on the condition that Karl agree to a series of interviews, so that the letter will be based on an authentic portrait of Karl. The letter, though effective, has unexpected consequences for Karl, Fiorella, and the writer.
Since reading The Fault in Our Stars I've been inspired to get out of my comfort zone (for me the safe tomb of YA paranormal) and try some different things. So when I was given the chance to read Dying to Know You I was happy to grab it. I've also just read Paper Towns (John Green again) and am really enjoying reading novels written in the first person with a male protagonist. This shouldn't really be a surprise to me as my favourite book of last year was Anna Dressed in Blood. Anyway, I'm getting off topic here but this is the difference with Dying to Know You and any other book I've read lately - the narrator is an elderly man. I wasn't sure how this would work but it got my interest.
I came to rely on him though, obviously as he's our narrator but also because Karl is monosyllabic at best. Karl is in love with Fiorella and her main passion (apart from Karl) is writing. She's already contacted the narrator as he's her favourite author and this is why Karl arrives at his door asking him to help him write to Fiorella. She's given him a list of questions that she wants him to answer but as Karl is profoundly dyslexic it's a completely impossible task. Scared that telling her the truth will mean the end of their relationship he turns to our guy who agrees to turn his thoughts into passages for him to pass back to Fiorella. Are you thinking what I am? That Fiorella is a nightmare and what the hell is she thinking? Karl's got it bad though and through the author and his meetings we get to know both of them better by degrees.
Like all good narrators though he's holding back on us and as his full back story is revealed I found myself caring more about what happens to him than to Karl at some points in the story. Karl has his own realisations and the road to these is often painful. He's taciturn by nature and I think the most touching parts of this story are when they both drop their guards and in just a couple of get-togethers the man has learnt more about Karl than Fiorella ever could. The story is made up of emails, poems, reminiscences and dramatic events. It doesn't exactly build to a crescendo but meanders its way there. I'd don't want to dismiss Dying To Know You as a gentle tale as it's stuffed full of drama, elements of coming-of-age, dealing with grief and first love that make it irresistible.
I keep referring to the narrator as him or that man because I don't think we get to know his name at all. I could be wrong. Let me know if I am!
Who wrote this? Essjay at 7:30 am

Email ThisBlogThis!Share to TwitterShare to FacebookShare to Pinterest
Labels: aiden chambers, dying to know you

Good for you exploring some contemp instead of just reading paranormal! I do not remember the narrator getting a name either so I think that is something that just wasn't included. But I loved his narration and his perceptiveness; as an older man, he has a lot more insight than the typical teen narrator.

Oh I do love a male protagonist, and I'm really looking forward to getting to this one, sounds like a wonderful read!