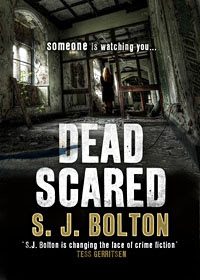 When a Cambridge student dramatically attempts to take her own life, DI Mark Joesbury realizes that the university has developed an unhealthy record of young people committing suicide in extraordinary ways.


Against huge personal misgivings, Joesbury sends young policewoman DC Lacey Flint to Cambridge, with a brief to work under-cover, posing as a depression-prone, vulnerable student. Psychiatrist Evi Oliver is the only person in Cambridge who knows who Lacey really is - or so they both hope. But as the two women dig deeper into the darker side of university life, they discover a terrifying trend . . .


And when Lacey starts experiencing the same disturbing nightmares reported by the dead girls, she knows that she is next.

Along with Phil Rickman, I think SJ Bolton is one of our best British crime and thriller storytellers.  Her books are consistently well thought out, frightening, well plotted and character driven.  Along with Mr. Rickman, SJ Bolton is one of the few authors whose books I'd I would pick up without a moment's hesitation, not even bothering to read the write-up on the back because her name guarantees you a ride you will not forget.

In Dead Scared we travel to Cambridge for all the action.  I thought: secret societies, odd shenanigans amongst the stacks, that type of thing...and not to exactly spoilt it, it is both yes and no but not like you'd expect.  Ms. Bolton gives us a very creepy story to try and puzzle out, using three characters' POV - Mark Joesbury, to a lesser extent, and instead focussing mostly on Lacey and Evie's characters respectively.

If you've read the most recent two Bolton titles, you would have met Mark and Lacey in Now You See Me and Evie you would have encountered in Blood Harvest.  Having said that, these books are very much standalone in that the characters obviously make reference to their previous lives (adventures) to give new readers an idea where they come from, but this story is very much an open and shut case making use of previously established characters, which works very well indeed.

It's really hard to review any of her books - because of how tightly they're plotted it would be easy to give away some intricate plot-point and bah, I hate that.  So, when Lacey's asked to head to Cambridge to go undercover as a mature student, in order to help Evie figure out exactly what was going on, she doesn't really expect to be embroiled in something bigger than a few students committing suicide.  But as Lacey and Evie expand their search - much to Joesbury's annoyance - they start finding more students, more than your average amount anyway - over the past few years, taking their own lives.

As they try and figure out who is behind it, as they expect a group targeting vulnerable students, things get pretty hairy for them both.  Evie's story especially freaked me out.  Evie is very dear to my heart.  I really connected with her when I read Blood Harvest and I love how logical she is and how self-assured she comes across whilst really, she is this bundle of fears and doubts, like all of us, really.  And the thing about Evie is, she's disabled, so my fears for her is always that she'll get hurt even more and I think Ms. Bolton knows that, so she doesn't actually play on Evie's physicality, threatening her bodily, but instead she goes about attacking her mentally.  It freaked me out no end.  Lacey, on the other hand is very much the physical person, so she's preyed upon not just mentally but also physically.

As the story starts unravelling and we find our pool of suspects, we are flung headlong into a flight to save both women.  And what I love best about SJ Bolton's books and writing, is how strong her female characters are.  They are flawed yes, but they are also intelligent, resourceful and they don't break easy. And although the men are as lovely and strong, the women don't have to rely on them to save the day.  I love that to bits.

This is a rather vague review.  Needless to say, it's done on purpose because you gotta read it for yourself.  In fact, if you've not read any SJ Bolton, I'd recommend you pack your holiday bag with her books or load them onto your kindle and indulge.  Each book is different, set in a  different place in the UK and each book offers you something very different.   The consist thing you get though is superb storytelling.  Also, it makes you wonder how such a nice lady can write such frightening books.  Hmm.

A word of warning though, Blood Harvest especially is not a book you'd want to read in a remote village in the countryside.  It did nothing good for my sleeping patterns.  Dead Scared, by page forty, had me so freaked out, I had to close the book and I had to ring Mark to collect me from the station because I couldn't face the ten minute walk home alone at nine pm in the evening after a blogger event. And the sun was shining.  Honestly.  Really good thrillers like this are rare and far between and honestly, SJ Bolton gives good thrilling action.  You will not regret it.

Ordered, many thanks. My wife will love it, and I might have a gander when she's finished.

Absolutely loved Dead Scared! I've yet to read Blood Harvest, but maybe it's a holiday book for me as I live in a village in the countryside (though it's not completely remote)!

I was just reading about this the other day - sounds like one I ought to add to my tbr pile!