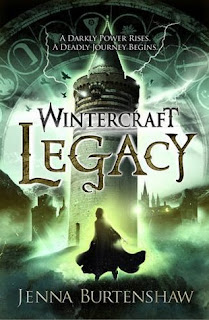 CONTAINS SPOILERS FOR BOOKS 1 & 2!
Synopsis
The veil which marks the division between life and death is falling. Lost souls are seeping though to roam Albion's graveyard city of Fume.

Kate Winters' recent memory is lost. Relieved to be heading home to Albion, Kate can't shake the feeling that Dalliah Grey, the woman she's supposed to be working for, is not to be trusted. Disgraced warrior Silas Dane plans to rescue Kate and save Albion from the advancing armies seeking to profit from the confusion. But the veil will not be easy to repair and Silas knows sacrifices have to be made.

Kate must return to the dark secrets detailed by her ancestors in the ancient book of WINTERCRAFT and learn from their mistakes to save herself.
I can't believe that we've reached the third book in this trilogy. It really doesn't feel like that long ago that the arc for Wintercraft was given to me by Liz. In actual fact Wintercraft came out in June of 2010 - wow, that time has flown. Nostalgia aside, I have great love for this series and Silas, Kate and Edgar are now firmly part of me. We left the trio, as ever, in trouble at the close of Wintercraft: Blackwatch. Kate was in the grips of Dalliah and robbed of her memory. Silas had come to the rescue of Edgar but unable to be of any help to Kate. Dalliah's greatest desire is to bring down the veil between the lands of the living and the dead in the city of Fume and Kate is the perfect person to do that. So powerful that even the Skilled want nothing to do with her - Kate really is more alone than ever. Until this point Kate's abilities haven't been tested to their full but the promise has always been there, lurking. It's this, the mysterious possibilities of Kate Winters, that intrigues me and propels the plot along. I was turning the pages faster and faster as her power unfolds.
Once back in Fume the plot takes off at a hurtling pace. Seriously, I barely drew breath for two-thirds of the book. What I love about Fume is that it's a city of layers. There's the land dwellers and those who live in the land below unbeknownst to anyone else. Then there are the souls of the dead, trapped within the walls and spirit wheels of the city like a forgotten tribe. The High Council have created an atmosphere of fear that keeps everyone in their place and the outlying settlements of Albion live in fear of warden visits that steal their people to take to Fume. It's obvious that something drastic must take place to disrupt the current regime.
After the events of Blackwatch, Silas is an outcast but he and Edgar return to the city with a plan. As the book progresses it becomes obvious that near-silent Silas knows exactly what Kate is capable of and, with the aid of his wonderful crow, he is determined to put a stop to what might happen next. A word about Silas. He's such a brilliant creation and a memorable character who I totally fell in love with. On the one hand he's deadly and ruthless but on the other ridiculously loyal with a hint of compassion.
There are a lot of threads to tie off and the author has skilfully woven them together to bring a satisfying ending to Wintercraft. Just when I thought things couldn't get more tense and exciting - they do! I adore the mysterious world that the author has created both the living and the one beyond the veil. I really hope and wish that someone decides to turn these books into a film. I can see the city below, the land beyond the veil, the craggy rocks and the terrified villages and just know they would be wonderful on the big screen. Well, I shall cross my fingers and hope that it might happen.
Who wrote this? Essjay at 7:30 am

Hi there.
My English is not very good, but I hope you will understand what I write. xD
Here in Poland, this series is not very popular. Many people simply do not like. On my shelf, still in arrears in the first volume. In the near future I want to read it. I'm a fan of fantasy, so I hope the series will fall to my liking. Recently in our country came out of the road, I hope that the third will also be released.

I invite you to my blog. On the right you will find the option that you translate it into ojczyzty language. This option is not perfect, but I think I understand what he writes about in their reviews.

I added you to watch. I'll be happy to read your notes, even if most-reviewed books you will not be with me.