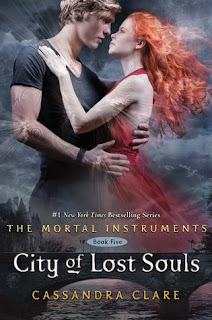 This interview has spoilers for City of Lost Souls!
As part of Cassandra's City of Lost Souls UK Book Tour MFB were invited to Theatre Royal, Stratford, London (Foyles organised this wonderful event) to ask questions about Magnus and Alec. To say that I was excited about getting the chance to interview one of my favourite authors is an understatement. So excited in fact that I charged my camera, put it in my bag but then forgot to use it. Even worse, I sit down, get my phone set to record and turn to Cassandra and say, "I've got loads of questions for you about Marcus." Marcus? Marcus? Oh, *headdesk.* Fortunately Cassandra was absolutely lovely and I soon got over my nerves and was able to get on with the questions.

It's lovely to meet you. My first question is about Alec. I was shocked by what he was prepared to do to keep Magnus – do you think it was out of character?
It would have been out of character for Alec to follow through but not out of his nature to think about it but then not let it go any further. Camile has a strange hold over Magnus and Alec is insecure and looks to Camille to give him some insight into the secretive person he is. Alec is worried that he might be disposable and thinks he can find a better understanding through Camille, that it might even the playing field. He's tempted by the idea but doesn’t go through with it. After seeing Magnus’s mortality on the battlefield at the end of City of Lost Souls, Alec would definitely not have gone through with it. In the end he made a moral decision (brought on by) the realization of what he could be bringing down on Magnus if he did follow through. The tragedy of the situation is that he lost Magnus for having considered it but it was understandable that Magnus did it.


Poor Alec! But when he goes home the house interior is different every time and he doesn’t have any say in his surroundings and no control. Isn’t Magnus being a little unfair?


Magnus has been alone for a long time, he controls his environment, he controls what he does - no one tells him. There’s an imbalance of power in their relationship and he wants to keep it that way.

Is it possible that Alec might find a way to level the playing field?


I definitely think so. Alec has grown up massively. I’ve watched him grow up through the books! He’s matured, he knows himself better, he can articulate his feelings better. At the beginning of the books he wasn’t able to talk to his parents about his sexuality but now he can speak openly about it. He talks about how hateful it is to be rejected, the pain of the unconsioucs pressure that your family puts on you. Alec needs to show how strong he really is and when he does I think Magnus will feel more able … Magnus needs someone to lean on and rely on and when he opens up and tells someone the truth about himself he needs to do it with someone who’s strong enough, with someone there who can be supportive and at the moment they’re not quite there. The breakup may be the thing that gets them there.

Is this partly Camille’s fault – did she cause Magnus to be so closed?


Camille’s definitely part of it. Magnus has watched a lot of people that he loves die. He a sucker for lost causes - that’s his love for Will right there. He loves to mend broken things. And then Camille comes along and she breaks his heart. We see him change from being this trusting guy who tries to fix things and invest in relationships to the man who isn’t willing to put himself out there, more secretive and less giving.


At this point we chat a bit about the fact that Magnus set his step father on fire and how it changed him.


The step father realised that Magnus wasn't his child. Magnus was defending himself, not really understanding what his magic could do and killed him.
No coming back from that then?
Not for the step father! It was a pretty bad experience for Magnus too.

Did you make a conscious effort to include characters that aren’t the stereotypical white and heterosexual?


I tried to represent New York in its diversity. A book about New York where everyone is straight and white would be very unrepresentative. So I tried to include Jewish characters, gay characters and different races. In Infernal Devices I had to try harder for it as Victorian London was very white. I brought Jem in because I really didn’t want to write a book with all white characters.


What would you say to aspiring writers who are scared about bringing characters into their books who have a different racial heritage or sexuality to their own?
It’s a moral value to strive for diversity and inclusivity. If you don’t include any gay characters or any non white characters or any non able-bodied characters you’re not going to hear anything about it. If you do, you may get criticism about the way you portray them but that’s okay – take the criticism and learn from it. Understand that you’ve chosen the slightly more difficult thing to do and criticism is part of that, don't be afraid. You’ll also get lots and lots of lovely letters too from people who say thank you - and that makes it worth it.


Why can’t Magnus go back to Peru?


Will we find out?


I’m having a lot of fun with people hinting at it. You know like in Frasier when Niles was married to Maris and we never saw her? I kind of relate the Magnus thing to that because in each book it gets worse, “Did you hear the story about Magnus in Peru? It’s the worse thing I’ve ever heard!” It’s building up to something really bad.

Warning: We go totally off-topic here as I wanted to talk to Cassandra about her tumblr piece about rape. We talk about rape myths, how they harm and the experiences of victims.
I wanted to talk to you about Clary and the piece you wrote on your tumblr about Rape myths, rape culture, and the damage done - I thought it was brilliant. I don’t think anything has changed since I was a teenager, the way that girls speak about other girls, and I find that quite sad. In fact it’s worse now that there's the internet and mobile phones.


Thank you. It’s one of the things that does concern me. My mother has worked her whole life with rape victims and she runs a charity now for rape victims, I volunteer with them. After writing that piece I have lots and lots and lots of letters that I’m trying to respond to - I want to give each one an individual thoughtful response. Some of them say that when they were assaulted, or when there was an abuse situation the reaction of their peers was difficult and in a lot of cases it was other girls. Girls have told me that they were raped by their boyfriends and then they’d go to school and people would be muttering, ‘Slut, slut, slut” behind their back in the halls and that’s the exact thing that I’m talking about.


We get these messages that come out of a place of fear that if you behave properly, that if you’re a good girl then this won’t happen to you and when it does happen the urge is to other them and push them away and say that they’re a bad person and that’s why this happened to them.

In my experience people strive to find a reason, to pinpoint the mistake that you made.


I think you’re right, I think that people say that that person was bad, that they made a mistake. There was a lot of fault finding with Clary. What was the thing she did that was bad that made this bad thing happen to her? What I was trying to say was that she didn't do a bad thing, it was a bad thing that happened. The other person was bad.

I also found it sad that people were pointing the finger at Clary and her response – that her response was somehow wrong.


Yes, and that Clary is a girl who did nothing wrong, that someone did something bad but she has a good relationship with someone else. She feels safe with that person - to be able to separate an assault which was not her fault, which had nothing to do with what she did from Jace. She's in a healthy relationship with a person who loves her, who's invested in her consent.
Thank you so much, it was lovely to speak to you.


And it was – it was honestly such a pleasure to chat with Cassandra. She put up with my longwinded questions, didn't make me feel for one minute that there were hundreds of people downstairs waiting for her. So much so that we nearly ran over! I got my book signed too which made my day as I was working the last time she came to the UK.
The next stop on the tour is 30th May Wondrous Reads with Simon and Isabelle
Followed by: -
31st May The Zoë-Trope Jace and Clary
1st June Dark Readers Sebastian
Who wrote this? Essjay at 7:30 am