Megan Lindholm lives in Tacoma, Washington, and has very fond memories of a blue Chevrolet Celebrity station wagon. In fact, she still has a chip of blue plastic that is just visible under the skin on her right knee from a near head-on in 1991. The car is long gone, but oh, how the memories linger. . . . Megan sometimes also writes fiction as “Robin Hobb.” 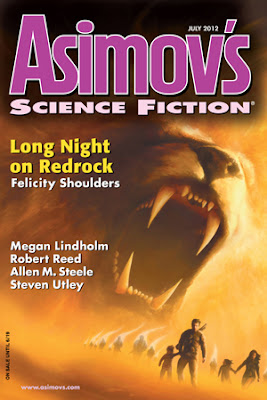 Old Paint is a novelette from the newest Asimov Magazine.  I've not reviewed a novelette or short story since Short Story Month last year, but Megan Lindholm's superb story really got under my skin - no pun intended - and I thought I'd share some thoughts with you.

If you read her as Robin Hobb, you know the girl can write.  Oddly, I've never read her as Megan Lindholm...which is weird for me, but regardless: she can write good words.

In Old Paint we are introduced to Suzanne (mom), Ben (the brother) and our narrator, a young girl whose name for the life of me I can't remember.  It is the near future, the year 2030 and things are relatively the same with slight differences on the technological front.

Our small family find that they've inherited an old car, which Suzanne eventually dubs "Old Paint" later in the story.  The car belonged to her father and she's surprised to find that he left her the vehicle after passing away.  She comes across as a stern mum, thoughtful and aware of the mess kids get in to at various stages of their lives but she's never unfair and she is really quite honest and open with them.  She gives glimpses of her wild life as a teen and tells her kids to listen to her, to not make the same stupid mistakes she made growing up.  Yes, she had fun, but in the end, it estranged her from her dad and she got pregnant with Ben.  However, her constant companion through her youth had been Old Paint, a car that her father had made sure could take care of Suzanne on her wild jaunts all over the country, even if he (the dad) couldn't be there to make sure she was okay.  Old Paint became a surrogate dad to Suzanne.

As the story unfolds, slowly, neatly, we get such a sense of love and nostalgia, even if the voice is that of the youngest child.  We see how Old Paint influences the family dynamic, and how his older technology is both an advantage and disadvantage to the faster, stranger, more aggressive world they live in.  The story isn't static and we get a great sense of shift in time frame as the story moves ahead, from the moment they get Old Paint to when we say goodbye to him and the characters.

Can I be more vague about the actual story without giving away the plot and core of the story? No - not really.  I apologise for that but it's a story that needs to be read and enjoyed.  Personally, it made me cry and smile and feel warm and shiny. The tone is perfect, the world building is so good and our glimpses into the technology and science is so integral to the story but it's never intrusive or jarring.  I kinda wish Ms. Lindholm would tell more Old Paint stories because it's making me nostalgic for a future that's not even close to being here yet.

Find the first part of the story here, on Asimov's website.

Oh,  Asimov's can be bought via your kindle via subscription, which is how I read it. I subscribe to three magazines: Asimov's, Clarkesworld and the Magazine of Fantasy and Science Fiction.  I think the subscription to Asimov is a mere £1.99 via Amazon and honestly, I think it's totally worth it. Do check it out, I'm sure you won't regret it!