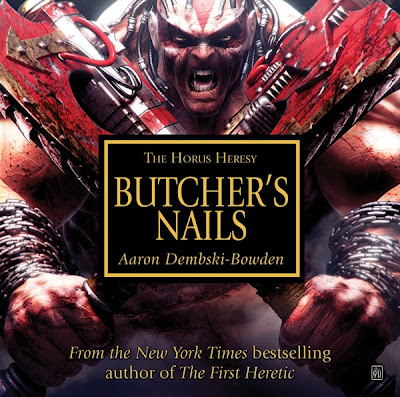 The primarch Angron: gladiator-king and Horus’s lunatic attack dog. Never having hidden his resentment for his brothers, he now carves a bloody swathe through the galaxy in the Warmaster’s name, with the Heresy providing a convenient excuse to indulge his love of brutal warfare. When they are tasked with a secretive mission alongside the Word Bearers Legion, the World Eaters’ violent tendencies soon attract the attention of xenos raiders, troubled by the portents surrounding the primarch’s berserk fury and his ultimate destiny as ‘the Blood God’s son’...

Butcher's Nails opens with Angron's World Eaters facing up against Lorgar's Word Bearers, brought to the precipice of an internecine struggle by the clash of two very different ideologies, and perhaps more accurately, two vastly different psyches. En route to Calth under order from Horus, Angron has deviated from the plan and left a trail of destruction along the way, having undertaken several planetary assaults that were more an indulgence than anything of strategic value.

Matters are coming to a head when the story opens, but whatever may have happened is suddenly diverted by the arrival of a fleet of Eldar Reavers, who launch a lightning fast ambush aimed at Angron's flagship, the Conqueror. Even though this attack is beaten off, it offers no respite to the mounting tensions as Angron refuses to proceed with their mission while the xenos are still at large, having effectively thumbed their collective noses at his Legion. A compromise is struck, and the hunt begins, a hunt that ends with a chilling warning, one that is lost on Angron but not his brother.

Butcher's Nails is about the characters, more than anything else, particularly Angron and his World Eaters, both of whom have been sorely neglected to date. The title itself refers to the aggression inducing and enhancing implants that the hulking Angron and each of his Space Marines have had implanted deep within their skulls, cybernetic implants that keep them constantly on the edge, plagued by misfiring synapses and chronic cranial pain that can only be relieved and transformed into an addictive euphoria and clarity of thought by not only succumbing to the siren call of such a blood red rage, but completely giving themselves over to it. And here, for the first time, we get a glimpse into Angron's fracturing mind. Suffice to say, he needs some serious therapy- the Hulk seem positively timid by comparison.

It's not just Angron that shines through here though; there's little fat amongst the supporting characters or their contribution to the story. Dembski-Bowden demonstrates a fine touch here, giving them a gratifying depth and making them interesting enough that you'd happily listen to their stories for the duration.The voice acting for the supporting cast and Lorgar is spot on: the latter is definitely rocking a Christopher Lee/ Saruman vibe, and it suits him to a T. Unfortunately the same can't be said for Angron. While it admittedly couldn't have been an easy brief for the actor - "Convince people that you're very angry all of the time"- what we're left with is someone who sounds constipated, not angry. The saving grace is the strength of the writing. You'll put up with it because you will want to find out what happens next and, if you're listening to all 15 tracks in one shot, you become inured to it and just go with the flow.

The sound effects aren't as bad as some I've heard, a mite repetitive in some places but I was generally happy with the additional colour they brought to the story (I'd love the servitors' "Compliance" for my text alerts).

Speaking of the tracks, it would be really handy if these were named, rather than just numbered Tracks 1-15. Butchers Nail Track 1, 2 etc would be sufficient to avoid my 'Black Library' audio folder becoming a confusing mass of identically named tracks.

You can listen to an extract here and visit ADB's website here.