The Good Neighbours: Kin by Holly Black and Ted Naifeh 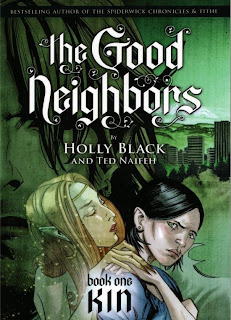 Rue Silver's mother has disappeared . . . and her father has been arrested, suspected of killing her. But it's not as straightforward as that. Because Rue is a faerie, like her mother was. And her father didn't kill her mother -- instead, he broke a promise to Rue's faerie king grandfather, which caused Rue's mother to be flung back to the faerie world. Now Rue must go to save her -- and must also defeat a dark faerie that threatens our very mortal world.


So I set it aside for a while, devoured a few other things and subsequently read it in one fell swoop this morning during my commute into work.


I lurve this little book so much. It stands out - for me at least - because of it's artwork by Ted Naifeh. Some pages are illustrated to quite obviously show the fae in the mortal world, all around us. And then there are bits that are illustrated where the fae presence is only hinted at. It's subtle and lovely and wonderful and I'm a fan. I also liked the tiny sneak in of a box filled with items and ontop is a copy of The Spiderwick Chronicles. And I think I spotted Jay and Silent Bob lurking in the background too in one panel...but maybe that was just me being too observant.


Of course there is the story that forms the backbone of Good Neighbours. At the heart of it we have Rue trying to cope with her mum walking out / disappearing on them. Then her father's odd behaviour when she did: he's not gone to work and been sitting around in the house for days on end. So with her home not being somewhere she wants to be she prefers hanging out with her friends. But even then things aren't going well. There are glimpses of odd beings and creatures that do not belong to our world that haunt her days.

When it's revealed that a student of her father's, a professor of folklore, has been found murdered and Rue's father is the main suspect, her world is shaken. Further injury is added when the police extend their investigation to determine if her mom had left out of free will or if she had been murdered.

There are some twists and turns here and there but those who know Holly Black's writing and those of us who are fans of fairy tales will find a lot of familair threads within Kin, but I'd hasten to add that this does not detract from the story or from Ms. Black's storytelling. She is so comfortable in her narrative that it's palpable. Kin is a great addition to a library for any person who has an interest in the supernatural or the fae. I can't wait for Book 2 - Kith - to be in my grubby little paws.

Lavishly illustrated and well written, Good Neighbours: Kin, feels a bit like a trophy book to me. It's a very tactile bit of published niceness that I'm very pleased to have on my shelf, along with all my other Spiderwick books and posters.
Who wrote this? Liz at 11:47 am