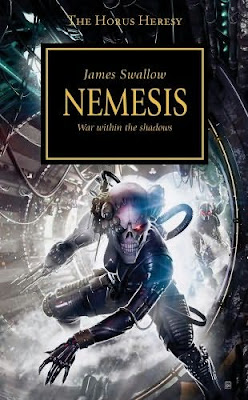 After the horrors of Isstvan V, Horus declares outright war against the Imperium. In the shadows of the Emperor’s Palace, powerful figures convene. Their plan is to send a team of assassins to execute the Archtraitor Horus and end the war for the galaxy of mankind before it’s even begun.

But what they cannot know is that Horus and his dark allies have already embarked on an equally sinister plan of their own.

This is the 13th book in the Horus Heresy series, which I’m happy to say shows absolutely no sign of slowing down. Like its predecessors, Nemesis is an insight into one aspect of the Heresy, in this case the reaction of the shadowy part of the Emperor’s court – the Officio Assassinorum (essentially the Ministry of Assassination). Comprised of six schools, it is the long, sneaky arm of Emperor’s will, silently eliminating enemies of the Imperium. The long shadow cast by Horus’ rebellion forces them to set aside their secretive protocols and work together to accomplish a seemingly impossible task: to kill Horus.

Horus’ fleet has embarked on its voyage to bring the uprising to the gates of the Imperial Palace, sending a bow wave of fear and insurrection ahead of it. Iesta Veracrux and its closest neighbour, Dagonet, are two planets that are starting to experience the fear and uncertainty that heralds the approach of the Sons of Horus. On Iesta Veracrux we meet Yosef Sabrat, a local investigator for the planetary law enforcers, as he heads out towards a crime scene. It’s a vicious, ritualised murder, and he sets about doggedly tracking the perpetrator down. As he does so, it gives James the opportunity to paint a great picture of the life and thoughts of the average Imperial citizen on the ground as the Heresy looms on the horizon.

However, it soon becomes evident that things aren’t what Yosef expects them to be, and the truth comes to light in a blood drenched epiphany that shoots the story in a completely different direction as the nature of the mysterious figure known only as Spear is revealed.

From then on, the game is well and truly on as the strike team of assassins manoeuvre into positions and set the bait for Horus, drawing him to the surface of Dagonet to crush the dying embers of a civil war which they had stoked into a blaze. Given that the outcome of the Heresy is already well documented, it was always going to be interesting to see how James would tackle the money shot. The six assassins are interesting and above all deadly in their own right, so there could never be an outcome as trite as having one of them fumble at the last minute.

When the moment comes, it’s tense and exhilarating, and the outcome ricochets the story into a different direction again, particularly as Spear has been advancing his own mission simultaneously. It’s a convoluted but brilliant idea for a unique and formidable opponent that you can actually believe would threaten the god-like power of the Emperor.

When their paths cross, it sets the stage for a silent, lethal war in the shadows of the carnage and devastation that the Sons of Horus’ thirst for vengeance wreaks upon the planet.

The inherent coolness of assassins notwithstanding, Nemesis is an absorbing and worthy addition to the ranks of the Horus Heresy, a definite must read.