Michael Ridpath talks Iceland, sagas and shows us some photos 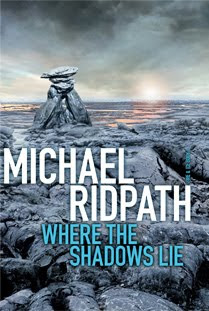 I was so excited reading Where The Shadows Lie last week, I impetiously emailed poor Michael Ridpath and gushed at him. He was clearly so taken aback by it and so stunned by my mad word skills, he agreed to a guest blog before he had time to register how devious I was! I was keen to find out more about him writing WTSL, how it came to and the locations he uses and he's kindly complied with the following guest blog:
***
Where The Shadows Lie is an important book for me. It is four years since I decided to change genres, and this is the result. 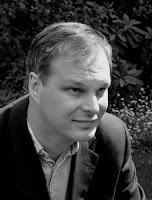 After writing eight financial thrillers, I decided to try my hand at something else. The motivation was partly commercial: although I thought my books were improving in quality, sales were declining steadily, a trend which I put down to a lack of interest on the part of the general reader in financial fiction. But also, after spending years dealing with subjects I knew well, I wanted to move on to subjects which were both new and interesting.

After examining the shelves of a local Smith’s to look for popular areas that appealed to me, I decided to embark on a detective series. For that I needed a distinctive detective. My sub-conscious settled on Iceland. I had been on a book tour to the country ten years before and found it a fascinating, quirky place. For years I had tried to figure out how I could set a financial thriller there, but couldn’t see how (of course now it would be dead easy!).

So I needed an Icelandic detective. The name was easy – Magnus. The late Magnus Magnusson is every Englishman’s favourite Icelander, and his name was far too good to waste. But then a problem arose: I needed a detective who spoke Icelandic but was also a bit of an outsider. This was partly because I am obviously an outsider and would find it hard to pull off book after book written from the point of view of someone whose language I don’t speak. But also I wanted to point out the many extraordinary aspects of Icelandic society, which would be difficult if Magnus was a native – to him they wouldn’t seem worth mentioning.

So I devised a complicated background for Magnus, which not only addressed this difficulty, but also gave him a set of personal insecurities of the kind that any good fictional detective should carry around with him.

Magnus’s story goes as follows. He was born in Iceland, but his parents split up when he was a child, and Magnus followed his father to Boston where his father took a job as a professor of Mathematics. Magnus grew up a lone Icelandic kid in an American High School, reading the sagas for comfort. He went to university and was planning to go to Law School, when his father was murdered. The local police couldn’t find the killer, and despite his obsession with the task, neither could Magnus. But it caused him to change his career plans and become a cop. 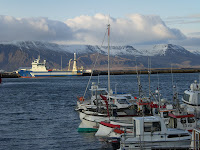 Twelve years later, he is a homicide detective in Boston when he gets caught up in a police corruption scandal and he needs to disappear for his own safety. The Reykjavík police are looking for an adviser to help them with increasing levels of big-city crime. So Magnus moves to Reykjavík.
He still doesn’t know who killed his father. I do, but I’m not telling you, or him. Not for a few books anyway.
So, I was happy with my detective, but I needed a plot. I did some background research. I read some sagas, the medieval tales of Icelandic settlers in the tenth century, and found them fascinating. So, a lost saga then. How about a professor of Icelandic Literature found dead at his summer house? 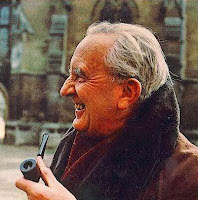 OK, so what’s so great about this saga? I wanted something really big, something that would resonate beyond Iceland. An answer came quickly: Lord of The Rings.

Not bad. I didn’t know much about Tolkien, but I thought it plausible that he had an interest in the sagas. I remembered at university reading an academic article by him published in 1936 about Beowulf. So I did some more reading.

Amazingly something happened which almost never does: the more I found out about Tolkien and the sagas, the more it all fit together. 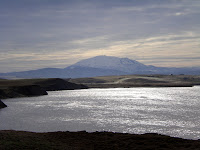 Tolkien was obsessed by Icelandic sagas, from the time when, as a child, he first read the translation by William Morris of the Saga of the Volsungs. He started an Old Norse drinking club at Leeds University in the 1920s, where they sang Icelandic drinking songs and read Icelandic tales. It turns out there is a bloody great volcano in Iceland called Mount Hekla which erupts all the time. It was known as the Mouth of Hell in medieval times, and is the perfect place to drop a ring. 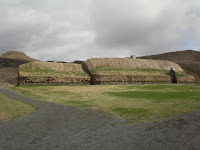 The most famous lost saga in Iceland is Gaukur’s Saga. Not much is known about Gaukur except that he lived at a farm called Stöng in the shadow of Mount Hekla. So much in the shadow it was covered in ash in an eruption in 1104 and rediscovered in 1939. This is a replica.
So everything slotted into place. Brilliant!

The problem was I didn’t quite believe the story myself. I don’t go in for the supernatural very much, and I didn’t want my man Magnus to either. You can’t write a story you don’t believe in.

What to do? Go to the pub with my friend Toby, that’s what. By the third pint Toby had the problem sorted. Magnus could remain cynical, so could I, and so could the readers, if they so wished. Some of the other characters in the book would be credulous. And I should inject just the tiniest hint of something otherworldly in the book, the barest clue, to set the reader wondering.

That worked. I started typing. 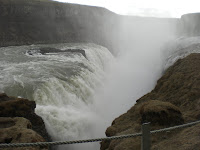 I won’t tell you the ending. But I will show you. (Liz: This photo is Gulfoss where the climax takes place - it's pretty evocative and scary and beautiful!)

With those ingredients, how could I fail to make a good story?

Michael Ridpath
June 2010
**Just a small note: all photos featured in this guest blog was taken by Michael during his visits to Iceland. Except for the Tolkien photo, of course. That was nabbed from here.
Who wrote this? Liz at 9:15 am

Wow what a fantastic post, so interesting and the photos are gorgeous! Thanks :) x

Thanks for sharing this with us, I found it interesting to read...