Summer Scream and an ABA* in London

*Awfully Big Adventure
Saturday dawned a little bit sunny, a little bit gloomy and we had no idea what to expect as our day was due to be busy. A lot was happening and if it was going to rain, it would be pretty rubbish.
So we got done after a lazy breakfast of bagels and headed into town. As we had the camera with us, I made Mark swing by Trafalgar Square so I could get a few shots of this: 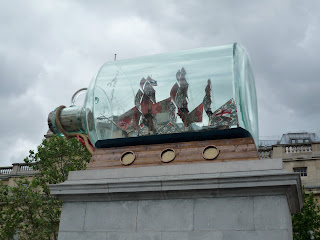 The ship in the bottle on the extra plinth in Trafalgar Square - pretty damn cool. The attention to detail is amazing.
Last year we managed to completely miss the West End Live event at Leicester Square but this year we thought to actually make an effort to go. It was packed and everyone was smiling and cheering on the various theatre stars on stage. A little bit of London Magic.
Naturally we had to show our support to our favourite indie bookshop, Forbidden Planet, as they had a stall there. We said hi to John, got to play with various items and then Mark got into trouble. As usual. 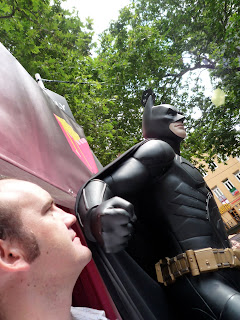 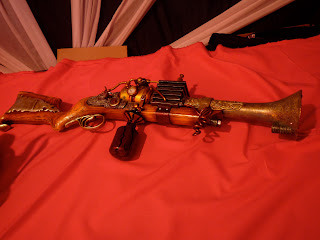 My forthcoming Xmas present from ME to Me. It's been decided. By ME! 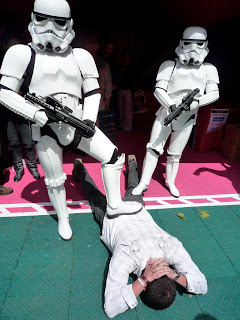 Mark being arrested by the 501st Legion. Again. 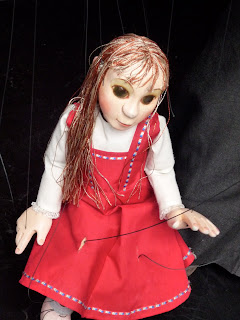 The people from the Little Angel Theatre were there too - I love (and am terrified by) puppets and would one day love to travel to Prague to buy a whole collection. Or make my own. 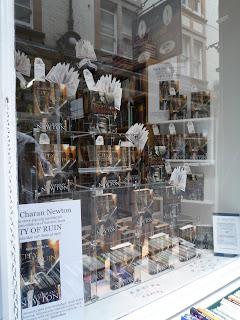 We swung by Goldsboro Books and spotted this lovely display of City of Ruin, Mark C Newton's newest offering. He was there later that day, doing a signing. We were about 4 hours early.
We stopped at Orbital Comics to see and touch all the pretty new comics but then realised we were running late for the Foyles event and legged it up Charing Cross Road. Needless to say, we weren't late! 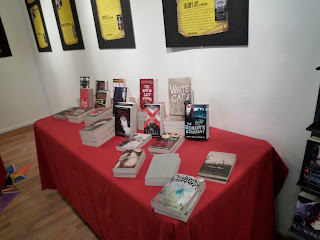 A display in the Gallery with some pretty shiny bookses. 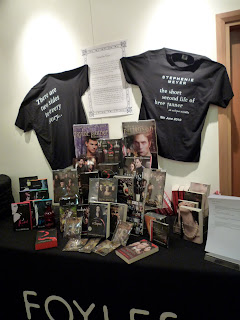 See this table full of these awesome goodies? One person can win this, if their short story entry is chosen. For more info pop over to Foyles website and check it out. It looks awesome..am really tempted to enter myself! 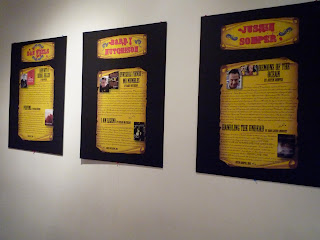 Some more info cards on authors and their books. 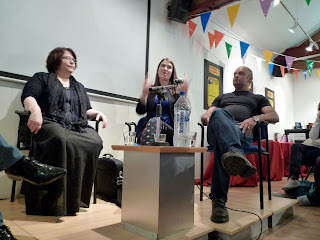 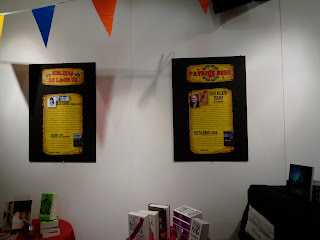 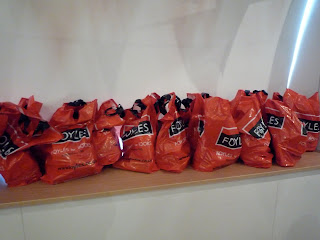 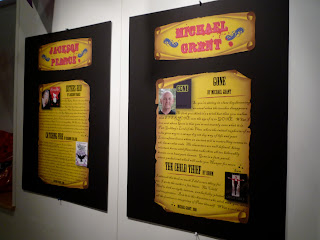 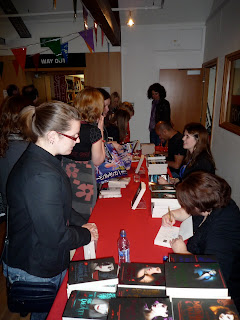 The all-important signing and schmoozing the authors. I stood in the queue to get The Demon's Covenant signed by SRB for the lovely Sarah. Mark got his copy of The Dark Goddess signed by Sarwat Chadda.
Then Kaz, Mark, Ana from The Booksmugglers and I managed to kidnap Sarah Rees Brennan for lunch. We stuffed our greedy little faces with burgers from GBK before heading for another exhausting stroll around Forbidden Planet, just in case there were shiny bookses that struck our fancy.
Then we bid farewell to Ana and Sarah and headed off to Madame Tussauds for an exclusive after hours press event to showcase the Marvel 4D exhibition. I really had my doubts - I mean, how much fun can it be to walk around a wax museum, right? Well, I'll say now that I was fascinated by the entire event. Apart from feeling like you've been invited to an A-list party, where you can meet some (immobile) stars, it was pretty cool.
I'd definitely recommend the entire thing - but the icing on the cake was the Marvel 4D movie which BLEW ME away. I know I wasn't the only one. We were beaming like small kids afterwards and stayed for a second showing. One scene had a London taxi flying through the air and landing in the fountains in front of Buckingham Palace. As the spray hit the screen we were sprayed with water from the seats in front of us. As Wolverine clawed his way out of the taxi, we felt the stabbing claws in our backs. Insectile robotic creatures crawled all over the screen, we felt them on our legs. It was surreal and amazing and we loved it. 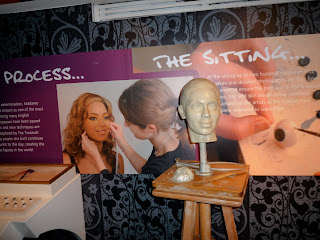 How it's all done! 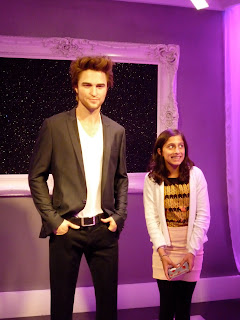 R-Patz - a fan refuses to inch up closer. I don't blame her. That glitter must be a nighmare to wash off! 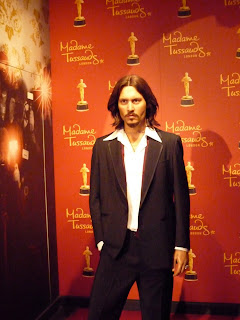 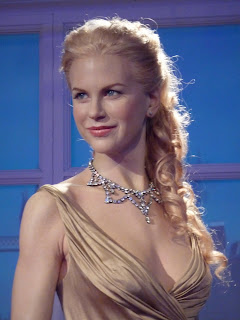 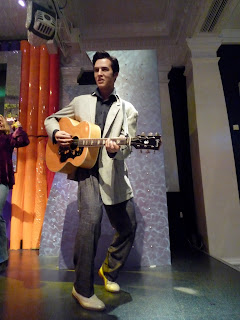 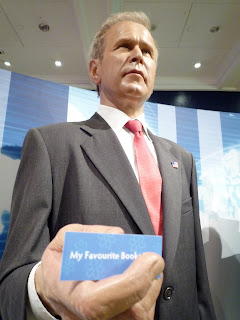 I know MFB have friends in high - and low - places, but this we didn't expect! 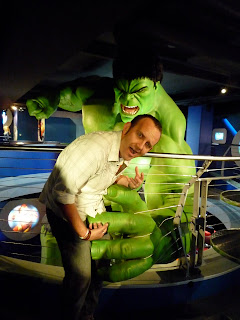 The Hulk decides that Mark needs to be nicer to me! 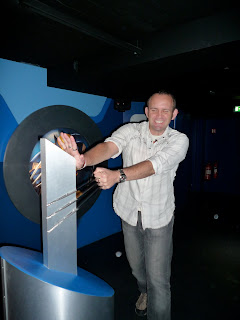 Mark, the pretender, tries to get his claws into Wolverine. 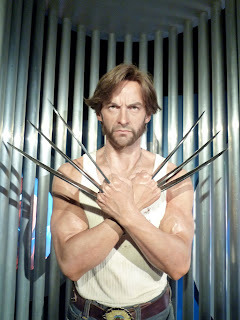 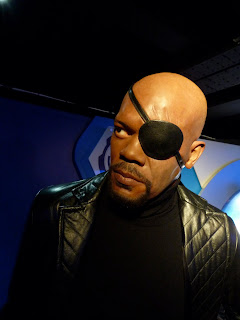 Nick Fury - how mean does he look in this?
When we left, we were handed very cool goody bags stuffed full of very cool Marvel items, a few comics, buttons, toys, sticker books. It was an amazing day - a busy day - but we were still smiling when we got on the tube home.
Thanks to the organisers over at Foyles for an amazing event at Foyles. The authors outdid themselves with the interviews and were genuinely amusing and generous with their time and answers. And a big thanks goes to Madame Tussauds and their dedicated PR team - you guys rock. We had an amazing time. In fact, I can't believe how much fun I had! I felt like a five year old, believing that any moment now that 4 metre Hulk was going to pick me up and cuddle me. It was a great day out.
Who wrote this? Liz at 3:10 pm

*grumbles about all the really fun events being in London*

You sound to have had a really great day. Dead jealous up here in Yorkshire!

It looks as if you guys had a brilliant time. Thank you for my signed book :)

That waxwork of Nicole Kidman is spooky in its likeness 0.o

Wow, it looked like you had a great time :) I actualled LOL'ed at the photo of W with your business card..

@Darren - dude, next time you're in London, you have to let us know and we can figure out what's on!

@Clover - so funny! I'm amazed we got away with it, to be honest!

@Essjay - it was good fun, but we missed having you around. I'll show you the Dame Helen Mirren one - it was even freakier in its likeness.

Looks like lots of fun! I would love to meet Rachel Caine is person.