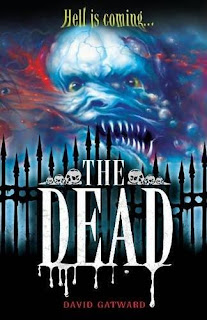 Lazarus Stone is about to turn sixteen when, one night, his normal life is ripped to shreds by a skinless figure drenched in blood. He has a message:

The dead are coming.

Hell is full, and they have found a way through to this world.

Now Lazarus is all that stands in their way. To fulfil his destiny, he must confront not only the dark past of his family, but horrors more gruesome than even hell could event – with only a winged angel and his best mate to help him. And it all begins with the reek of rotting flesh...
Poor Lazarus.

One ordinary night he’s at home chatting to his mate Craig, whinging about his dad being away from home yet again, making plans for a few days away in Craig’s parents’ caravan. A bit dysfunctional, but otherwise blessedly mundane.

By the time the sun rises though, he will have come face to face with a blood drenched fallen angel, had everything he’s ever known thrown into doubt and seen hell ripped open in his lounge.

And from there things only get worse as the truth about his absent father comes to light, sending Lazarus and Craig are thrown into a desperate flight to find his father and stop the dead from punching through into our world, with only an apparently alcoholic angel to guide them.

Lazarus is a likeable character: a normal, reluctant student who’s desperately trying to cling to the life he’s always known, flawed as it might be; it’s a vain attempt though as Gatward quickly drags him into a hell tainted reality.

Clocking in at 230 pages, The Dead is a quick read but it packs mean punch between the covers, creating a clear sense of Lazarus’ life diverging from normality, a journey punctuated with some truly terrifying imagery and magnificent gore. Equal parts terror, splatter and fun, The Dead’s a great read and I look forward to the second instalment in the series (The Dark, due in October this year).
Find David's website here. The dead arrive 1st July 2010. Are you prepared?
Who wrote this? Mark at 9:30 am

I am now very intrigued :) Thanks for the review

I'm astonished! Such a tremendous review. Really chuffed you loved it as much as you did. Thank you!