Kitty and the Midnight Hour by Carrie Vaughn 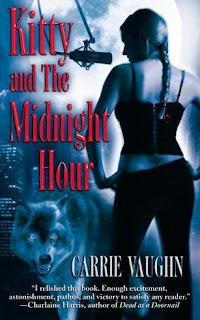 Kitty Norville is a midnight-shift DJ for a Denver radio station - and a werewolf in the closet. Sick of lame song requests, she accidentally starts "The Midnight Hour", a late-night advice show for the supernaturally disadvantaged. After desperate vampires, werewolves, and witches across the country begin calling in to share their woes, her new show is a raging success, but it's Kitty who could use some help. With one sexy werewolf-hunter and a few homicidal un-dead on her tail, Kitty may have bitten off more than she can chew...

What a fun and unusual read. Yes, it deals with vampires and werewolves. But before you walk away thinking "oh no, not another one" let me point out that if you are after a bit of reality in your urban fantasy, then you're looking at the right book and author.

Carrie Vaughn has created a very levelheaded and and real character in Kitty Norville. She's not a werewolf by choice. She got mauled by one and turned. She is now part of a pack where the Alpha Male gets to sleep with whomever he wants. She's the lowest of the low within the pack and has to be subservient to everyone else higher up on the chain. No one in "real" life knows she's a werewolf, not her mom or the radio station's owner, Ozzie. This naturally causes a bit of friction and althought it could have lead to deep introspective moments, which would have not helped the story along, Vaughn has kept the story strong and moving at a very good pace.

Through Kitty's radioshow you get to learn a lot about her and how she perceives the world. I think Kitty should run for Senate over in the States. Maybe even here in the UK - more Kitty's in the world to set the world right is exactly what is needed. She is levelheaded and unbigoted. She calls the shots as she sees them and in doing so, finds her own strengths. She starts standing up for herself at the radio station and as part of the pack.

And all hell breaks loose. She is outed on the airwaves as a werewolf by an assasin sent to kill her. Using her wits and her gift of the gab, she turns things around and survives. She comes to the attention of the police, the vampires and the supernatural community at large. And not everyone likes what she is doing: becoming an Agony Aunt for the supernatuals listening to her show.

I loved the book and will be getting the others tomorrow, hopefully. I can't wait to read what Kitty gets up to in Washington. Her life has been turned around, she's on the run from the pack after challenging both male and alpha males and losing a friend. But she's still doing the show. And now she's been called in by the Senate as an advisor, much to her horror.

I know the books have been out a little while, but it wasn't until I read a recent review of one of them, that I thought it would be a good idea to get myself a copy of the first one. Urban fantasy need more heroines like Kitty and Harper (from Kat Richardson's Greywalker books) because they turn the oversexed and tedious we've been lumped with by various other authors on the flipside and get down to what matters: making the characters real enough to identify with and telling good stories without having to rely on copious sex scenes to bump up the word count - the sex there is, is sexy and forms part of the overall picture...it is not the picture.
Now that's what I call a writerly challenge! And Carrie Vaughn succeeds. This is where Carrie lives online and this is her journal.
Who wrote this? Liz at 10:40 pm

Thanks for the review. This sounds similar to my stuff :)

Great review! I love all the Kitty books, the others are just as fab as the first - and they're one of my 'comfort reads' - so you'll be in for a treat ;)

I am pleasantly horrified at the number of books you've received in this short time, Liz! I've been catching up on my reviews, but still, that many books would take me several years! :D

I love the Kitty books and can't wait for number 5.