Mark and I attended the large author signing event at Forbidden Planet London last night with our friend Karen Mahoney. We got to chat to all the authors in attendance, there was a surprise guest appearance by the inimitable Robert Rankin (who did the most amazing sketch for me in my new autograph book) and everyone seemed to have an amazing time.
Authors in attendance were:
James Swallow
David Devereux
Alex Bell
Suzanne McLeod
Joe Abercrombie
Tom Lloyd
Mark Chadbourn
Jaine Fenn
Jon Courtney Grimwood 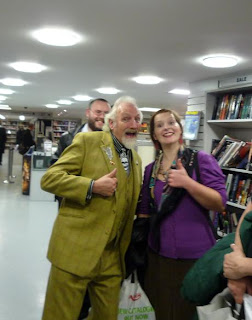 Witness the coolness of Mr. Robert Rankin and friend - I felt a complete paparazzi running around taking photos of everyone. 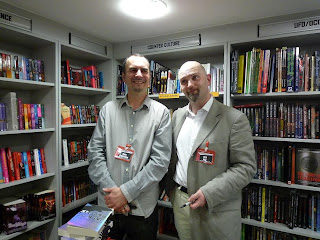 Mark Chadbourn (left) and David Devereux (right) signing stock as the evening moved towards its end. I like to think it was the halo-like effect of the light above them that drew our Mr. Devereux's pensive side. Or maybe he was just contemplating a pint...

The big table of books were being cleared and the authors were taking their ease. From left to right: Joe Abercrombie, James Swallow, Jaine Fenn, Alex Bell, Tom Lloyd and Suzanne McLeod. 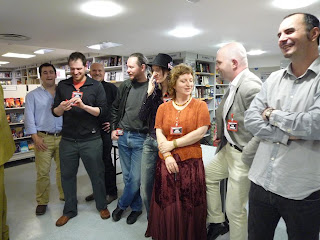 Danie Ware from Forbidden Planet instigated this shot - she tried to get them all to fit into the same frame. It progressed though and soon everyone made it in. I sadly could not fit another picture on the blog to prove that they all managed to squeeze in. But I do have it if anyone is interested!

Girl Power - Alex Bell (left) Karen Mahoney (middle) and Jaine Fenn (right) mugging it up for the camera. And that's Mark in the background looking smug. 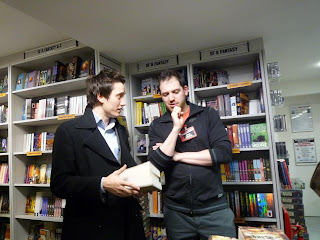 A glimpse of the large table of books with various authors chatting and signing.

David Devereux chatting to Jonathan Weir from Gollanz, with Graeme Flory of Graeme's Fantasy Book Review behind them.

Suzanne McLeod got Mark, Karen and I invited to David Devereux after party at the Phoenix Club as part of the launch of his new novel, Eagle Rising. We had a brilliant time and got to chat with several of the authors and we were introduced to a new rising star at Gollancz, Stephen Deas whose upcoming novel, The Adamantine Palace, is to be published in March 2009.

Can't quite begin to describe the "high" you get rubbing shoulders with the greats like this and realising that they are in fact lovely, normal people who not just like what they do for a living, but who love talking about it, as much as their fans do.
Back to the mundane world today. I do however hope the photos gave some kind of idea how much fun everyone had.

Forbidden Planet did an amazing job of pulling this off, so thanks to Danie Ware and her team for entertaining all of us. We all had a brilliant time.
Who wrote this? Liz at 9:09 am

Man that looked like a wonderful evening! :-) Everyone looked so relaxed, glad you all enjoyed it! :-)

Great to see you had a cracking time liz. Just hope that they take this show on the road. Maybe Manchester way. LOL

I got in the pictures! :o) If only James Swallow had moved to his left a little (and got in the way of my beerbelly *redface*)

Thanks for the post and the pictures - we had a fantastic time and hope to be doing more events like this in the future! Much kudos to Dave for setting it up and thanks to everyone who was there :)

Damn, damn it all. Someday I will kidnapp all the fantasy authors and bring them in Romania. Beware I am dangerous man ;)

Very nice photos. It looks like a very nice evening, I envy you guys. Thank you for this very nice post :)

Thanks all - we had a lovely time. Danacea and her team made it all look amazing and effortless.

Thanks, Liz :-) [Love the one of DD contemplating his pint, sorry halo *g*]Great photos, and wonderful to see you both last night!!

Wish I could have been there!

Wonderful post and pics, Liz. Big hugs to you - can't wait to hang out at the Phoenix Club again... ;)

Great pics! Sooooo jealous of your fun and frolics while I was stuck in the office.

I love the pictures. It's great to put faces to names.

Great to meet you all! Much fun was had...