The Stormcaller by Tom Lloyd 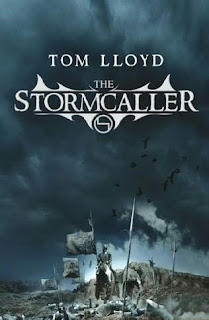 
In a land ruled by prophecy and the whims of Gods, a young man finds himself at the heart of a war he barely understands, wielding powers he may never be able to control.

Isak is a white-eye, born bigger, more charismatic and more powerful than normal men… but with that power comes an unpredictable temper and an inner rage. Feared and despised by those around him, he dreams of a place in the army and a change to live his own life, but the Gods have other plans for the intemperate teenager. Isak has been Chosen as heir-elect to the brooding Lord Bahl, the white-eye Lord of the Farlan.

The white-eyes were created to bring order out of chaos, for their magnetic charm and formidable strength makes them natural leaders of men. Lord Bahl is typical of the breed: he inspires and oppresses those around him in equal measure. He’s a difficult mentor for a boy every bit as volatile as himself.

This is a time for revenge, and for the forging of empires. With mounting envy and malice, the men who would themselves be kings watch Isak as he is shaped and moulded to fulfil the prophecies that circle him like scavenger birds. The Gods are once again beginning to meddle in the affairs of men.

In 2007 I asked Gollanz to send me some books to review - my first approach to a publisher as MFB was very fledgling back then and I think I was a bit arrogant but Jo Fletcher took pity on me and did not press the "smite" button on her computer. I got sent a copy of The Twilight Herald by Tom Lloyd - a proof copy, no less, but I was a bit miffed. Why send me the second one if I've not even read the first one? So it languished on my shelf. For more than a year and a bit. In retrospect, I should have pulled my finger out and gone out and bought the first book to read and review.

The first one being The Stormcaller. This I bought when I realised that I would be meeting Tom as part of the ten authors signing at FP a few weeks ago. I got stuck into reading The Stormcaller and have subsequently become smitten and can't wait to plow into the second instalment and the rest, for that matter.

It is 150% action, adventure, grit and grime - genuinely well told fantasy of the highest order, with sweeping battle scenes and complex characters and plots to make Machiavelli's head spin. As I said, I became smitten with the story being told - I completely lost myself in it and ended up reading snippets out loud for Mark to appreciate.

At the very start of the novel, the dialogue was a bit shaky but then you can see the author grow confident in his creations and they take on a life of their own. Lord Bahl, specifically, is a character I really enjoyed reading.

The main character, Isak, is very complex. I initially thought that he was not going to be easy to like, but because the author takes great care to explain where Isak comes from, his thinking, his reasoning and his background, you come to appreciate him for the young, brash, funny, impulsive character he is. Also, if you had to imagine growing up as quite poor, disliked, hated and reviled for being different, and then to have yourself raised up to power and status, the likes you would never have imagined, you could see the personality clashes already happening.

The author keeps a tight reign on the various plotlines - and there are plenty - along with a myriad of characters. But far from being confusing they each take up their own role within the novel and none of them are there purely as extras. This, readers, is the sign of a true artist - keeping the wheels spinning, keeping all the pieces on the board at play, whilst moving ahead with the actual story, and having them intersect at the right places, that is pure brilliance.

The mythologies built around the created world works very well - here is someone who has spent ages putting this world together and he has cleverly linked politics, religion and mythology into something believable. The scope is genuinely breathtaking and written very cinematically which I truly enjoyed.

I can heap more praise on this, but I won't, because you'll think I'm gibbering. And I am a little, I suppose. But then I'm allowed!

All I further want to say is: if you've not read Tom Lloyd before and if you are in the mood for gritty realistic fantasy of a high calibre, you should and must go and buy The Stormcaller. Read that, then go buy The Twilight Herald and The Grave Thief (which was published in December 08). You won't regret it - and if you are an aspiring writer looking to break into the fantasy market, and you worry about fight scenes, go read Tom's battle descriptions - bloody, fast paced, heartfelt and it rears off the page. If you are a writer keen to find out about good characterisation - read it for its characterisation, plot and pace.

It's made of win, all the way.

The whole trilogy is on my 2009 to buy list for August and October.

Anyway thank you for your review. It seems it is the right decision to buy and read these books.

Nice review. I started this one and had trouble with the beginning. Guess I should give it another shot. I'll be sure to add this review to my daily review link-up later this evening, too.

ediFanoB..i believe this is actually a 5 book series, if I remember correctly on the author's website.

Hi Jeff, of course you're right. It's a five book series.

Anyway thank you or information.