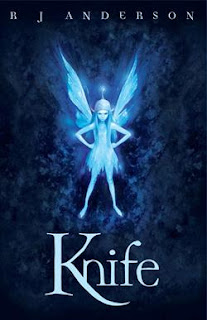 There are humans at the bottom of the garden, and a glimpse inside their forbidden House convinces the fierce young faery known as Knife that they have knowledge that could help her dying people.

But if the human world has so much to offer, why is the faery Queen determined to keep her people away from it?

Is there a connection between the House and the faeries' loss of magic?

And why is Knife so drawn to the young Paul McCormick — that strangest of creatures, a human male?

Ms. Anderson introduces us to Bryony, a young, rebellious faery who is struggling against the constraints the society within the Oak has placed on her. She is envious of the Queen's Hunter, Thorn who is allowed Outside, she is even more envious of the Gatherers who are allowed out in order to forage for food, to feed the other faeries within the Oak. Bryony yearns to do something, to experience things, to not be cooped up.

She impulsively leaves the Oak, much to the horror of her carer/mother, Wink. As luck would have it, she leaves the Oak the same time the young human boy from the House decides to try and clamber around the branches. They come face to face for a brief moment, before she is pulled away to safety, away from certain capture by Human Boy.

As a sort of punishment for her willfulness, Bryony is sent to do the most tedious jobs around the Oak - for four years she is one of the lowest ranking faeries in the tree. But then the Queen summons her to a meeting and hands her to Thorn, to train, as the next Hunter.

And then we're off! Bryony grows taller, stronger and faster during this time - she finds out that she is genuinely good at being a hunter - she is a bit of a maverick, she excels at her new task. Through her newly acquired skills she receives a higher standing within the community of the Oak and for a change she is able to barter for items, on the same footing as the other faeries.

Bryony's character is carefully cast - she is extremely likable and you do feel compelled to root for her, as she grows in confidence and turns into a valued member of their society. But, she still does not conform - it's not in her make-up to do so. She visits the House, feeling drawn there. In fact, she makes several visits, unable to stop herself. She learns that the human boy, Paul, now older, will be returning home soon, that something terrible had happened to him.

It is through her relationship with Paul, who at first tries to keep her safe by putting her in a box, after she is attacked by a crow, that the differences between the faery society and human society become highlighted. Bryony, now called Knife as she is the fully fledged Queen's Hunter now, Thorn having retired, discovers that the tales told within the Oak about humans are very far from true. She strikes up an unlikely friendship with Paul which makes things very difficult for both of them.

The story unfolds with many twists and turns - the above bit that I've given is only part of what happens, there is so much more to be had and it is all written with the same steady consistent and compelling storytelling which make this a very moreish read. And before any boys out there think that Knife is a book about cuddly faeries - think again. Knife is fierce, independent and probably someone you want on your side in a fight. The story digs much deeper than I anticipated and I loved it. If you are at a loss as to what to read, having loved Spiderwick Chronicles and you're not quite ready to tackle Holly Black's novels, Tithe, Valiant and Ironside, as you feel it may be just that bit too advanced, give Knife a try. You'll be pleasantly surprised! (Also if you are an adult - Knife is a fantastic addition to any urban fantasy fan's bookshelf.)

Knife by RJ Anderson feels a very accomplished novel and I have high hopes for more from her (write faster, Rebecca!). You can find her website here and her livejournal site here. Knife is published in the UK by Orchard Books, part of Hachette Children.
Who wrote this? Liz at 9:21 am

Fabulous review!
I love the premise.

My librarian had a huge load of books delivered by the Waterstones van today, and me and my best friend & fellow bookworm were fishing through the stacks to see what there was. This was one of them - I'll have to read it soon.