Shadows Edge and Beyond the Shadows, Brent Weeks 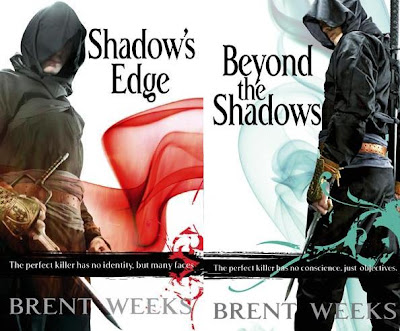 Shadow’s Edge picks up smartly from the end of Way of Shadows and, after a brief honeymoon period where Azoth /Kylar gets to have a fleeting taste of the life that could have been, the repercussions of what had been stirred up in WoS come home to roost.

’Edge is a fast paced, fistbiter of a sequel to WoS. It’s clear that Brent is that much more comfortable with his main characters; the actions flows smoothly and the dialogue is smart and snappy. The story grows as it develops, expanding the horizon beyond occupied Cenaria; the cast is correspondingly larger, but Brent keeps them under tight control and the storyline remains lean and compelling, trimmed of any excess baggage which would hinder its cracking pace.

I dived into Beyond the Shadows the morning after devouring the last of Shadows Edge (due in no small part to the little surprise on the last page of ’Edge). As expected, it was all systems go from the beginning. Sometimes I wondered how Brent was going to manage bringing all the myriad threads together for the finale, but he does. The paths all converge, like streams merging into a waterfall, drawing you inexorably towards a thundering climax, a clash of magic and steel that leaves no one unscathed. The scale of it is immense, far removed from Azoth’s humble origins.

Anchoring it all is Azoth/Kylar, who, having become the Night Angel by necessity, now struggles to come to terms with the fine print of his immortality and his calling, and what that means for those closest to him. The rest of the world, however, isn’t about to wait for him to find his way through of the tangled web of his emotions.

The pace of the story across both books takes no prisoners; I found it hard to do more than grunt at Liz while either book was open, which was every time I could find somewhere to sit. In my book, there's no better accolade than the simple fact that it's hard to put them down once you start reading.

Anyone with even the remotest taste for bold, engaging fantasy should look no further.
Who wrote this? Mark at 10:28 pm

I read and loved Way of Shadows.
Shadow's Edge and Beyond The Shadows are both on my shelf....unfortunately unread. I still have to decide what to read next after Chronicles of The Black Company by Glen Cook.

Anyway thank you for recalling these books.

It's good to read that also book two and three of the trilogy are worth reading.

Book two was my favourite :)