How Kirsty Jenkins Stole the Elephant by Elen Caldecott 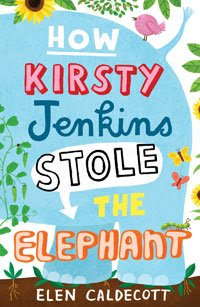 Kirsty Jenkins adores the allotment her grandfather lovingly tends and, just before he dies, he asks Kirsty to look after it for him. But when horrible Mr Thomas from the council insists it must go to the next person on the waiting list, Kirsty is determined to find a way to keep her promise.

After pleading with Mr Thomas and demonstrating at the council offices, Kirsty and her half-siblings undertake their most daring plan of all: to ‘borrow’ the stuffed elephant from the museum that Mr Thomas loves so much, in a last-ditch attempt to gain his attention and understanding. Perhaps this risky ruse might also shake Kirsty’s dad from the quiet sadness he has fallen into ever since her grandfather died.

A warm, funny and moving novel about family relationships, dealing with bereavement, green beans and marrows.

This is such a wonderful little book - a lovely and engaging main character, some truly hilarious laugh out loud scenes and an outrageous a plan on how to steal a stuffed elephant from the museum - it makes for a fun read and something I would definitely recommend for younger readers as it is very easy on the eye and the story flows quickly.

Kirsty's character is a treat - she has a very vivid imagination which is used very cleverly to illustrate the scenarios she finds herself in. For instance, in the museum, as she is about to thieve the elephant, she ghosts along to 007 music in her head, becoming a superspy and stealthy assassin all in one.

Kirsty's motivations are pure - she is not about to break her word to her grandfather - she will get to look after the allotment, no matter what! Even if she has to stage a truly badly thought out protest in the Council's offices, spy on Mr. Thomas during his leisure time and break into his office to fake her name onto the allotment waiting list - she'll do whatever it takes.

Since the death of her grandfather, her own dad's succumbed to deep depression. But Kirsty and her step-brother and step-sister are not prepared to let him languish - they miss him and they are worried about him. Even dancing like a wild thing to the Sex Pistols, her dad's favourite band, does not rouse him from his self-imposed hibernation in his room.

Thieving the elephant from the museum is not just to draw the attention of Mr. Thomas and the media, to their plight, but also to wake up their dad, to get him to notice them again - to realise that the world had moved on since the death of his dad and their grandad.

I thoroughly enjoyed How Kirsty Jenkins Stole the Elephant and I think that it reads very well - especially out loud. Yes, it is aimed at a younger audience, but it has that quirky magic that will lend it being appreciated by an older audience too.

How Kirsty Jenkins Stole the Elephant as published by Bloomsbury, was longlisted for the Waterstones Children's Book Prize and it is easy to see why - it is a funny, poignant story with a lot of heart. Books like these are made into feel-good flicks for the whole family.

Kirsty's blogsite is here and Elen's site is here.
Who wrote this? Liz at 11:50 am

I love the sound of this book! Thanks for the interesting review.