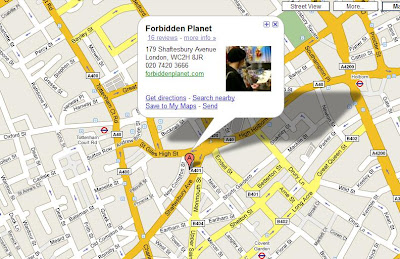 As I was having my tea this morning, waiting to wake up, here at work, I did a quick recon of what my favourite sites have got going...and naturally I stopped by FP's site to check on any updates on their signings calendar...
And I almost freaked out - sheer geeky nerdy joy. I knew about two of the signings I mention below, but the most recent update blew me away. Read on...
People, FP are doing their utmost to cause stampedes at their shop - I am concentrating on signings here in London as I'm sort of partial to the store!

Raymond E Feist @ FP on 12th March to promote his brand new novel: Rides a Dread Legion - to take place between 6 - 7pm.
Then, another massive insane signing which promises plenty of geekjoy:
2000FP - Thrill Power Overload! (and this I've nabbed from their site) 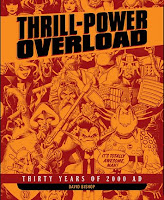 FORBIDDEN PLANET is delighted to announce that we’ve teamed up with 2000AD to celebrate our 20000th (well probably!) signing! On Saturday 21st March 1 – 2:30pm at the London Megastore, 179 Shaftesbury Avenue, we’ll have the absolute best in British Comics: -

Although I am TREMENDOUSLY excited about the above, NOTHING quite compares to the next signing as I am such a huge fan of both authors. (again nabbed from their site)

Mike Carey is an extremely popular and well-respected author who has written on several top comics titles such as Lucifer as well as the adaptation of Neil Gaiman’s Neverwhere. Thicker Than Water returns us to the life of Felix Castor, where memories thought left in Liverpool resurface in London. Childhood memories, family traumas, sins old and new come back to torment the city’s favourite freelance Exorcist. Things go from bad to worse until the only question left is – just how much will Fix have to pay..?

Kate Griffin is the name under which Carnegie Medal-nominated author, Catherine Webb, writes fantasy novels for adults. A Madness of Angels is a book about the power of London, Urban Magic, ebbing and flowing with the rhythms of the city, amking runes from the alignments of ancient streets and humming with the rhythms of trains and buses. This is the London of Matthew Swift, where rival sorcerers do battle for the soul of the city.

Mark and I will try to attend all of the above events and will bring you photos, chats and photos of autographed books. Did I mention that I love living in London and that I love Forbidden Planet even more?

Just caught this - thank you, Liz!! See you there :D