As everyone in the world should know by now, thanks to the media frenzy reporting the snow-event, it's snowed everywhere last night. We couldn't get to work becuase our trains weren't running, at all. In fact, we went to the park and took photos of the tracks which were completely snowed over. Southeastern Trains yet again showed their true colours and did not run, at all - not a single service. It is a bit embarrassing, actually.

However, we got to have some tremendous fun in the park. Witness our pics below.

Mark hanging around with some of our neighbourhood kids building a snow man. 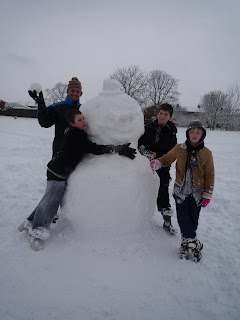 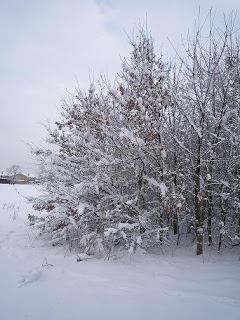 Snh, snh - Mark playing at being a snow angel! 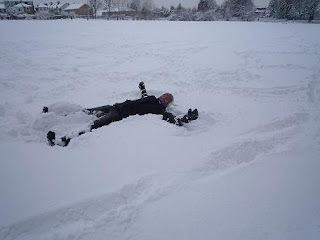 Our backgarden - the snow on the small wooden table measured 22cm this morning at half seven. I think it's gone a bit higher than that by now as it's been snowing on and off during the morning. 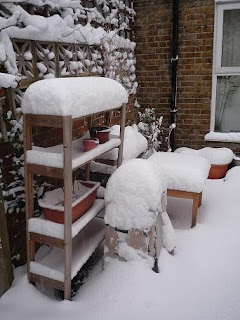 This is the little snow we had in our back garden last night, compared to the photo above this morning. Gives you pause for thought, eh? 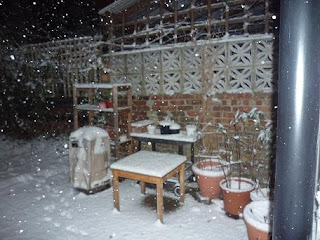 So, after getting back in from playing silly people in the park, I made some cheese scones and invited our arty neighbour around for tea and scones whilst we watched the snow pack deeper in the back.
I'm on the couch, with MTV playing in the background, ready to settle in and write three reviews - Ginger Snaps, Bedlam and Stormcaller - and to read, Hand of Isis by Jo Graham which is, to be honest, a tremendous feat of research and storytelling. Am utterly enarmoured and can't wait to see how it develops more.

schools closed in London?
I can understand in the country side but London ?
a disgrace !

Still the little one loved it.

I went to work, half an hour through the lanes in the snow. But it's not that deep yet out here. Of course last time it snowed like this I was a kid and my brother and I dug a den out of a drift in the fields.

I did the perilous drive ... slip-sliding quite a bit. Gave me a proper cardiac workout. But, all pretty okay once I managed to get to main roads.

If it happens again I'm staying home. Lucky this time, maybe not the next eh?