You're travelling through another dimension, a dimension not only of sight and sound but of mind; a journey into a wondrous land whose boundaries are that of imagination. That's the signpost up ahead - your next stop, the Twilight Zone! 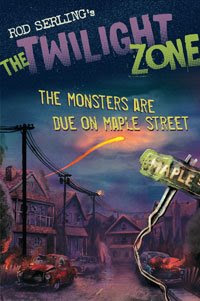 The Twilight Zone: The Monsters Are Due on Maple Street by Mark Kneece, Rod Stirling and Rich Ellis

A shadow passes overhead and a loud roar is heard, accompanied by a flash of light. Neighbours along Maple Street grow confused as they find that the telephones no longer work and there is no power. As the sun sets, they gather together in the street to discuss the matter. Only Tommy, a young boy, sees the situation for what it is – an alien invasion which disrupts his neighbourhood.

The Monsters are due on Maple Street freaked me out a bit - bearing in mind that this was written in the hey-day of the Twilight Zone shows, it still reflects topically how quickly and easily friends and neighbours can turn on one another, as is shown in real live news footage and as it is depicted in various t.v. shows, such as Jericho and Lost, for instance. It also clearly indicates the paranoia people are prone to, if you don't know what is going on. Stephen King's The Mist is also a very good example of this.

The artwork is crisp and clear and I have to say, out of the two I picked up to read this morning on my way into work, this one is my favourite. The character's emotions are depicted graphically but then there is also the what is shown and not shown in the picture boxes. A good, if chilling read. 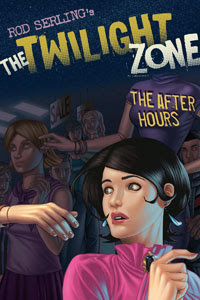 The Twilight Zone: The After Hours by Mark Kneece , Rod Serling , Rebekah Isaacs

When dissatisfied shopper Marsha White tries to return a purchase to the eighteenth floor of a department store, she is surprised to find out that no such floor exists. Feeling faint, she lies down in the store manager’s office and wakes up, hours later, after the store has closed for the night.

Wandering the dark and empty store, Marsha hears voices calling her to the eighteenth floor as her unusual shopping trip continues in a very unexpected way.

This is every shopper's nightmare - you buy an item, discover its damaged, you go and complain and then you discover the item you've bought is not stocked by the department store...not just that, but the floor you bought this on, doesn't exist either! Add to that you pass out and then wake up in the department store, only to find that you've been locked inside. And someone in there knows your name and keeps calling you. You get in the elevator and discover the impossible...A creepy little story with a definite Twilight Zone twist at the end.

***
These graphic novels are taken directly from the scripts of some of the Twilight Zone episodes and although they are aimed at younger readers, they should not be seen as childish / infantile.
The element of creepy and weird is strongly felt and is a worthy addition to any graphic novel fan and / or Twilight Zone fan's bookshelf.

The Twilight Zone graphic novels are published by Bloomsbury.
Who wrote this? Liz at 12:38 pm