Hand of Isis by Jo Graham 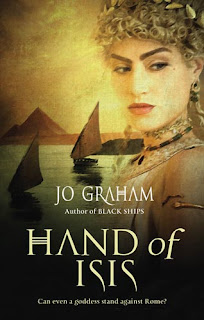 
Against the rising power of Rome, Egypt is the last and strongest bastion of the Eastern Hellenistic kingdoms. Charmian is Cleopatra's half sister, daughter of Pharaoh and a woman of the harem. She shares a great honour and a terrible burden with Cleopatra and their sister Iras - they are fated to defend Egypt from those who would destroy her.

So when Roman Julius Caesar comes to Egypt in pursuit of his enemies, Charmian and her sisters are drawn into a deadly struggle.

One that will shape the world to come.

From mysterious temples hidden in the desert to the perilous palaces of Rome, from the tomb of Alexander the Great to the very Gates of Amenti, Charmian must face foes seen and unseen in a battle her family, her love and her gods.

I read Black Ships by Jo when it was published and I really did enjoy it, finding her writing very easy on the eye and her storyline was different, ethereal and refreshing. I could feel it in my bones that Orbit managed to hit on something big here when they signed Jo and I wasn't wrong.

The proof is in the reading, as they say. Although Hand of Isis is not yet released for a month, I couldn't put off reading it any longer. And I am so glad I did. It fit in perfectly into my reading schedule and it was a dream to read.

This is my prediction: Hand of Isis is one of my reads for 2009. I am pretty sure it will become a favourite with other reviewers and readers alike.

It has everything that grips a reader - fantastic setting, two legendary romances and several characters from ancient times, strong descriptive imagery, the pageantry of a time long gone and immersed research. It is strong on plot and politics yet it never becomes boring. The storytelling stays fresh and the writing is tight.

I am frothing at the mouth as I write this - if you are a regular reader you will understand that when I gush, I mean it from the heart.

Charmian's story is written in first person narrative and it is a very intimate story of the legitimate daughter of Ptolemy, Cleopatra and her two half sisters who, due to their mothers being women and slaves in the Pharaoh's harem, cannot be officially recognised as his daughters. This however does not stop the three of them becoming fast friends. As younger children they got into all sorts of trouble - Cleopatra was of no real consequence in the royal family - she had older siblings who were there to take up the responsibilities of the land. She was content to become a scholar, she had a voracious appetite to learn and was denied very little in that respect. She was ignored by everyone in the household, really, but that did not mean that she ignored what was going on around her. With her two sisters, Charmian and Iras, and her tutor, she kept abreast of the follies her father the Pharaoh made. A level headed, highly intelligent young woman, she called the dice as she saw them.

They are forced into exile where the three sisters realise that they have a higher calling - Cleopatra offers herself to Isis, to become her representative in the Black Land, to defend it against all comers, to become the guardian of the land and its people. Charmian and her half-sister Iras, in turn become the Hands of Isis, the Companions.

Told from Charmian's point of view, as Cleopatra comes to the throne and the subsequent world-changing events they took part in, the story remains fresh and new with some of the best descriptive paragraphs I have come across in ages, especially when Cleopatra goes to meet Mark Anthony, in the guise of Isis - bringing him and his armies the supplies, grain, men and ships he so desperately needed. You can almost smell the incense and visualise the clothes, the food and the settings. These sections are wonderfully written and something very few writers get right, without it becoming tedious or repetitive.

I am pretty sure the majority of people know the rest of the story of how Cleopatra becomes Queen of Egypt, her romances with Caesar and Mark Anthony and the trials and tribulations that she goes through, how she has been vilified in Roman times as the seductress, the housebreaker, for taking Caesar away from his wife, by giving him a son. In turn she forced Mark Anthony to acknowledge the children she bore him and made him divorce his wife. And the subsequently tragic end it all came to. I'll tell you quite frankly, I sobbed like a broken doll when I read about the destruction of Alexandria and of Cleopatra's fate. I knew it was coming but because it was told with such skill, without glamming it up, it hit home. And you realise that the historical figures really were only people in real life, doing the best they could.

Charmian's gift of seeing the future is one she fights against, the supernatural element is very strong in the novel, but pertinent to the story, reflecting the deeply devotional way the lives of everyday Egyptians were in that time. How the Pharaoh and his wife were representatives of the gods on earth, how people saw them as Isis, Horus and Osiris, the parents of them all. How closely the land was tied to them.

There is another character in the book which forms a huge part of the novel - that of the city of Alexandria itself. The author has clearly done so much research and she writes with such love of the city, or the ideal of the perfect city and its citizens, that you feel a bit bereft that you can't be there yourself. Something else which I appreciated is the allusion to the Companions - now anyone worth their historical salt, knows that the Companions are what Alexander the Great's friends were called - these were the men whom he trusted implicitly and they in turn loved him irrevocably, following him to the ends of the earth. There is a strong and fascinating strand throughout the book of Charmian and others that she meets, recognising themselves as being there before, of knowing each other before, in even more ancient times. Of being Alexander's Companions, his Hands to shape history.

Enough from me - put Hand of Isis on your to buy and read list for 2009. It is a solid beautifully written piece of work with haunting passages telling a familiar story by shaking the cobwebs off it and exploring the themes of friendship, duty and love and the ultimate price paid to destiny.

Find Jo's website here. There is an interesting article she's linked to from her LJ site about Charmian's role in Cleopatra's household as mistress of the household. The article is about the new social secretary in Obama's "reign" in the White House and as Jo says: very little has changed in the 2000 years since Charmian looked after Cleopatra.
Who wrote this? Liz at 1:36 pm