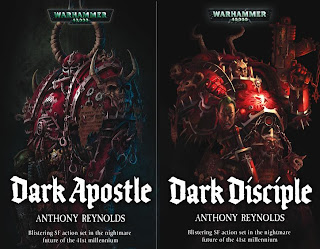 If there was ever any doubt about the interpretation of the 40K tagline 'In the grim dark future, there is only war’, these books will put paid to that. Actually, they’ll tear it apart with mass reactive bolter shells, fuse the remains with a white hot blast of superheated plasma and char whatever’s left in a tide of burning promethium.

Dark Apostle introduces us to Marduk (good name!), the commander of a cohort of the Word Bearers. Under the command of Jarulek, the Dark Apostle, he leads his Word Bearers in the subjugation of the Imperial World Tanakreg.

The story unfolds at a good pace, and through the eyes of Varnus, an ex enforcer who is captured and forced into slavery, we get a glimpse into the grim reality of life on a planet overrun by Chaos. It goes without saying that it’s a bleak and harsh fate that awaits those (un)lucky enough to survive the initial assault, and Varnus' descent into this hellish existence is the vehicle Anthony uses to bring this to life in all its sordid glory.

Dark Disciple picks up the story smoothly after Apostle's earth shattering close, with Marduk at the centre of the action as he seeks to unlock the the secrets of the mysterious Orb, the prize a world died for. The action remains a bloody litany of rage and violence; what lifts it is that it’s not gratuitous- these are, after all, Space Marines, bred and conditioned for war. Mixing in the taint of Chaos and unfettered access to heavy weapons is simply throwing petrol on an already raging fire. And this time, Marduk and his troops have a plethora of equally deadly foes to test them; they need every ounce of skill and ferocity to survive, let alone emerge victorious.

These books are an utter smorgasbord if, like me, you enjoy your action thick and fast; I found the carefully considered poke around inside the collective head of a hitherto faceless enemy equally interesting too, and I think there's still a lot of mileage to be had from the mysteries of Lorgar.... rumour has it the third instalment is on the way- I'm going to be keeping an ear to the ground for that.. the unexpected twist at the end of Disciple made sure of that.

You can read an excerpt from Apostle here, and Disciple here.

If that's whet your appetite, email me (the usual rules)- the guys at The Black Library have kindly given me an extra pair of copies to give away. We'll announce winners on Friday, 13th! UK entrants only, I'm afraid.
Who wrote this? Mark at 9:31 pm