Marked by PC and Kristin Cast 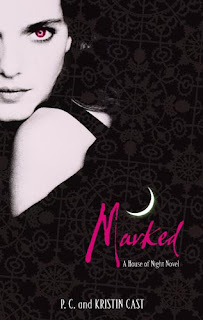 When sixteen-year-old Zoey Redbird gets Marked as a fledgling vampire she must join the House of Night school where she will train to become an adult vampire. That is, if she makes it through the Change. But Zoe is no ordinary fledgling. She has been chosen as special by the Goddess Nyx and discovers her amazing new power to conjure the elements: earth, air, fire, water and spirit.

When Zoey discovers that the leader of the Dark Daughters, the school's most elite group, is misusing her Goddess-given gifts, Zoey must look within herself to embrace her destiny - with a little help from her new vampire friends.

Oh no, I hear you cry - not another vampire story. Witness my finger wagging, saying: "Shush, don't judge before you try."

The authors, mother and daughter team PC and Kristin Cast, manage to come up with a unique spin on vampires in this, the first of their series: Marked.

Zoey is by all counts a normal teen, not too enamoured with the new dad in her life, her mom's conversion to one of the People of the Faith leaves her reeling and her best friend's incessant chatter is driving her mad - never mind the fact that she's struggling to cope with an almost ex-boyfriend, Heath, who seems to be more keen on partying than trying to finish high school.

You get all of this in the first few pages of Marked. At the same time Zoey gets marked by one of the Vampire Seekers. The mark forms on her forehead, immediately setting her apart from her friends and peers at the high school.

She legs it home, praying that her mom would understand. Instead, her mom freaks out and phones the new step father who in turn decides that a prayer session is in order - as praying over the mark and Zoey will make it go away. Or not.

Zoey bides her time for a few hours, before making a run for it. She runs to where her grandmother has her farm. Zoey is part Cherokee and personally, I loved the humble and unobtrusive way this is introduced. She runs to the place she knows she'll be safe - and accidentally almost dies. If one is Marked, one should get to the House of Night as quickly as possible to help work through the Change. Vampires exist in real life - everyone knows about them - they are the famous actors, the artists, the glitterati.

Nyx appears to Zoey as she lies unconscious, on the cusp of living or dying, singling her out by filling in her mark - which is very unusual. Fledgling vampires have outline marks only - only vampires that have fully Changed wear the coloured in mark.

Zoey awakes in the School of Night - her grandmother took her there the moment she found her passed out at the farm. (A note here on the grandmother: a wonderfully warm, serious, funny and wise character - immediately likable and interesting. I have a suspicion that the grandmother, apart from being a wisewoman, has a very interesting story of her own.) Zoey is introduced to a new roommate, Stevie Rae, at the school, who in turn introduces her to a group of other fledgling vampires which strongly reminded me of Buffy's Scooby Gang - there is no plagiarism or anything but the Whedonesque one-liners are hilarious and the characters are all good fun. I think their role will be expanded on in the rest of the series - it would be a pity if they didn't get more playtime as they sizzle on page.

The School of Night is an interesting concept, cleverly thought out and I love the variety of tutors and subject that are covered - who knew equestrianism would ever be a subject at vampire school?

I am looking forward to the rest of the series. I have a copy of Betrayed, the second in the series to read (thanks Graeme!) and am looking forward to it. Marked is a very competent, fun, vamp young adult / teenager novel with tremendous cross-over appeal for the adult urban fantasy market. Zoey's character is well established, there is room to grow the other characters in her newly made circle of friends and her relationship with vampire sweetie, Erik is very promising indeed.

And, to celebrate the coolness of Marked and the talent of the two authors, I'm happy to offer two copies of Marked up for grabs. The rules are: email me at the email to the right, with your name and address, specify "Marked" in the subject line and I'll draw winners this coming Sunday, 1st March. This is for UK entrants only as I'm paying the postage. Anyone can enter - regardless of age.

Find PC Cast's website address here. The House of Night novels are published in the UK by Atom, part of the Little Brown group.
Who wrote this? Liz at 9:06 pm

I'm glad you enjoyed it, the series gets better and better!

The only thing that slightly annoyed me was the teen speak. Did it bother you at all?

It bothered me, prophecy girl. (omg, you name sounds like a superhero name!) The ideas were good but the teen speak almost made me shelve it for good.

I didn't mind the teen speak, most of it. And the stuff they were talking about, I think made it more realistic. It was refreshing, because so many YA books tend to tone down what teenagers actually talk about. Maybe these ones sound more like 5th/6th years than the 3rd years they're supposed to be, but I liked it.

And as none of that was what I actually came to say:
My librarian bought a huge load of shiny new books last week, including the 1st 2 from this series. I read Marked over the weekend, and Betrayed yesterday. I really want the third one now! It was so good!

Great series ... and I loved Grandma too and felt there is much more than meets the eye, or rather reaches the page.