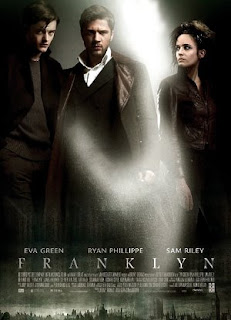 We attended a preview of Franklyn on Tuesday evening, with a Q&A afterwards with the director, Gerald McMorrow.

The movie is out today.

And it's a very difficult movie to sell as it is neither one genre or the next. Yes, there are elements of the fantastical and weird and Meanwhile City looks amazing on the screen as this huge mega-city overlooked by statues of winged angels...but then, it is also a very character driven movie which one does not tend to find often in either sci-fi or fantasy.

There are four storylines to follow and they meander along, hardly interweaving at all, until you do start noticing a one or two characters perhaps passing each other in a hallway and slowly but surely, you start picking up on this more and more.

I try not to know too much about a movie when I go in to see it - I like making up my own mind. I knew very little about Franklyn, who the director is and what he did before - thanks IMDB - but I did a brief stint of research and watched some clips on Empire's website. It looked interesting and I actually thought, initially, that it's going to be a bit like V for Vendetta and there is that element of seeing the less-pretty parts of London used in the movie, and it was really cool thinking "waitaminute! isn't that....?" as the camera pans along roads and small alleys.

Preest's character as played by Ryan Philippe is the first one to be established in the movie and he is very freaky - gravelly voiced and American, narrating about the existence of Meanwhile City, its lust for religion and how he stands out as he is hunted since he has no religion. He has his informers and he keeps himself to himself. But at the same time he is hunting The Individual who is the head of one of the religious cults and The Individual had taken a little girl to sacrifice. Preest was doing his best to find the little girl when he is apprehended and tossed into jail for four years.

Eva Green's character(s) is probably the most startling - she plays Emilia, an art student who films her various suicide attempts as part of her project. There is more to Emilia than meets the eye and I personally thought Eva Green was stunning and the role suited her to a T.

Sam Riley plays Milo - jilted by his fiance at the altar he struggles to continue with his life and imagines that he sees his playmate from his childhood, Sally, at various stages through the movie. Sally is also played by Eva Green. Sam Riley is just so pretty and mournful and is such a nice guy, that you sort of wish that his ex-fiance implodes. How can she leave him just like that?

Then there is Bernard Hill who is desperate to find his son who had disappeared - he was due for day-release from some kind of institution but who has gone missing. His struggle to find his son is touching and there is this one scene where he allows someone to put up a notice on an already overfilled noticeboard about young people who are missing and you just feel his anguish.

As I said - Franklyn is a difficult film to pin down. Visually it is stunning - I really liked it - and the characters are interesting. Milo's character should have had more development I think, purely because he deserved it. But there are times when the shots linger a bit too long, when they are just too meaningful and it serves to make the movie drag.

Franklyn is a flick that people are either going to love. Or hate. I don't think there will be a middle ground here, so be warned. You can just not feel ambivilent towards it. It is ambitious and it does a lot on a very small budget. I am really keen to see what the director Gerald McMorrow will be coming up with next, purely because he seems a very self-contained and astute man. There is something very deliberate and calm about him - he makes me think that he's testing the waters, seeing how far he can push the boundaries and ye gods, isn't that what Brit directors do time and time again?
Who wrote this? Liz at 12:59 pm

She filmed her own suicide attempts?? What a kook! Imagine making a movie you never expect to see.