Percy Jackson and the Battle of the Labyrinth by Rick Riordan 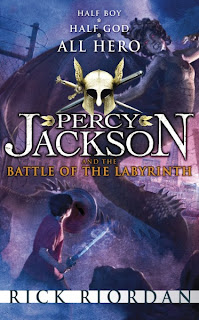 Honestly, blowing up another school was the last thing I wanted to do. As the son of a Greek god, I've had my share of near-death disaster. This summer, I didn't choose to battle the cheerleading squad, but when two hissing she-devils with fangs are heading straight for you, what's a half-blood meant to do?

This is the fourth book in the Percy Jackson adventures and it is a no-holds barred fun read - no matter your age.

Percy has moved on from being the newbie at Camp Half Blood - he has had several adventures since and has developed into an interesting capable character and is very close to his two friends he made his first summer, Grover (the satyr) and Annabeth, one of the daughters of Athena.

Percy manages to escape being eaten by the cheerleaders at the school (they were actually emposai, servants of the goddess Hecate), with the help of Rachel Elizabeth Dare who, although she is a mortal, can see through the Mist - the Mist is a type of glamour supernatural creatures cast about themselves to appear normal to humans and the ordinary world.

Percy meets with Annabeth outside the school and they run off to the safety of Camp Half Blood where Annabeth is given her first quest - she has to lead a quest into the Labyrinth to find Daedalus's workshop. Grover is given one more week in his own seeker quest - to find the great god Pan. Together with Percy's half-brother, Tyson, the friends set off into the depths of the Labyrinth, not knowing what my become of them. Some people have disappeared into it completely, never to return, others have returned crazed and insane.

In each book, the stakes are raised higher and higher. In this novel it is the safety of Camp Half Blood that is at stake - an ex-camper, Luke, has betrayed them and has joined forces with Cronos, the Titan, to demolish the camp and by doing so, clear the way to move on Mount Olympus itself to kill Zeus and his clan - to bring chaos to the world.

The friends battle countless enemies, mythical creatures of times gone by, along with human adversaries, keen to cash in on the chaos created by Luke and his advancing army, so there is action and adventure to be had and some pretty dire situations which only quick thinking gets them out of.

If you're a fan of mythology, action adventure and quest novels the Percy Jackson books are definitely a good read. Battle of the Labyrinth is the fourth in this series but I would like to hasten to add: it can be read as a stand-alone. And having said that...it may quite easily tempt you to buy the first three too.

The writing is strong and uncomplicated - the characters are well developed, having become comfortable in each other's company and the pace is a steady march to battle.

There is an excellent Percy Jackson website which can be found here, complete with links to extracts of the books and a newsletter to subscribe to.

Percy Jackson and the Battle of the Labyrinth is out in March 09, published by Puffin.
Who wrote this? Liz at 9:46 am

Hi Liz,
I'm having trouble emailing you with this address myfavouritebooksatblogspot(AT)googlemail.com

I replaced (AT) with the @ symbol but still no luck!

Clicking the link gives the email address as 'at@googlemail.com'

It's OK - spotted the difference.
I forgot the plural - books not book. Of course you have more than one favourite!