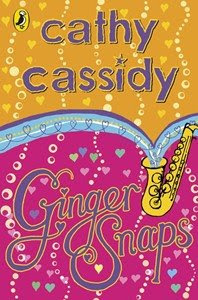 Gone are the days when Ginger was an outsider, always on the fringes of friendship. She’s swapped puppy fat and pigtails for make-up and hair straighteners and never looked back – until now.
Ginger and Shannon are best mates, but when they befriend lonely Emily, everything changes. Even the saxophone-playing boy in the trilby hat can’t help – he’s part of the problem . . .
Are Ginger and Shannon drifting apart or can they stay best friends forever?

Gingersnaps (as the boy in the trilby calls the main character, Ginger) is a very thoughtful, well written and deceptively deep novel from the Queen of Teens, Cathy Cassidy. I've not read any of Ms. Cassidy's books but I am aware of how popular she is so it was difficult to see past that at first. Oh, for maybe the first paragraph!

The novel is fantastically readable and highly recommended - it follows the story of Ginger, once an ugly duckling, a freak, the girl on the side, the nerd, the one everyone at school made fun of or ignored entirely. Always sitting on the sidelines, looking in, wishing to be part of the bigger cooler group of kids.

Ginger's now a bit older, she's tamed her hair, learned how to use make-up to cover up her freckles and she's learned how to dress. She's not, in any way, a mean person, which I appreciated. Initially, you have the impression that she's pretty together but the cracks appear in her facade as she realizes that her best friend (who chose her by the way) does not approve of her budding friendship with the freaky funny boy wearing the trilby who plays the saxaphone - Sam.

Ginger struggles with her image, her friendship with Shannon and the new member of their small circle of friends, Emily. She is so scared she's going to revert to being the weird one, the one no one talks to, if Shannon starts preferring Emily to her, that she completely freezes up and decides to walk away from her budding friendship with Sam (whom I have a teeny tiny crush on as he is just so cool in his oddness). She then takes a long hard look at what Shannon expects from her as a friend, how sweet Emily is in reality and she realises that she's made some wrong decisions in her life. The moment things start changing for Ginger, you feel like clapping with glee. She's remained a nice person throughout, a bit of a pushover really, one who lets Shannon walk all over her. But then she seems to come into her own personality and she stands up for herself - not just to Shannon but also to the teachers (read the book, you'll understand) who in their well-meaning way, were trying to force her to do something against her will.

The book deals competently with a teenager's struggle to find their own identity in a world where everyone has to toe the line and not stand out. It also deals with how careful you have to be with your friends, old and new, along with being bullied and how to handle yourself in situations like that.

GingerSnaps is a treasure trove of wonderful writing, a good storyline and importantly, there is a lesson to be learned - stand up for yourself, be yourself and don't allow yourself to get bullied, even if it is under the guise of friendship and peerpressure.

I would recommend this to be read by both boys and girls of eleven years up - even if the cover might turn off some boys! - it is a fun read, with some brilliant jokes that had me grinning, an interesting main character in a dilemma which only she can solve.

If all of Cathy Cassidy's books are this fun, I may have to go out and myself the rest! She's definitely turned me into a fan.

This is Cathy's website (which is just insanely cute) and if you look under the Books section, you can read a sneak peak of GingerSnaps.
Who wrote this? Liz at 11:37 am

I've heard great things about this book and your review makes me want to read it even more. (Someone else reviewed it on our site!) I've loved earlier Cathy Cassidy novels and I think she's an excellent writer.

Im completely and uterly in love with Sam Taylor :D
And im not ashamed to admit it (Im kinda in love with 27 fictional charactors, so i've already declared myself as a sad person, Ahh well )