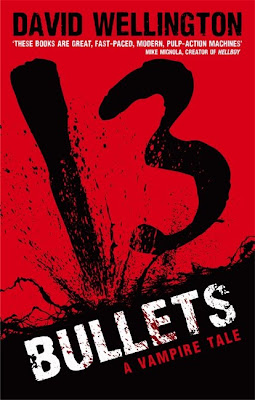 Laura Caxton thought she was just a State Trooper working highway patrol. Tonight she’s going to find out her true destiny: hunting down the immortal, nearly invulnerable predators that haunt the night searching for our blood. Her only ally is Jameson Arkeley, a US Marshal who has devoted his life to hunting down vampires, long after everyone else thought they were extinct. The two of them are our only chance—assuming they can survive the night.

I really like this cover. It's striking, edgy, and hints at the carnage that lurks within. I had an urge to read some vampire fiction recently, and this was one of the titles suggested to me. By happy coincidence we had a copy lurking on the shelves and I jumped straight in.

13 Bullets opens with a transcript of federal agent Arkeley's report on the incident in which he apparently killed the last vampire back in the mid 80's, a feat that nearly killed him several times over. This bit's in first person perspective, as befits a copy of a report, and quickly lets you know a) how ruthless and inhuman the vampires in this world are and b) that Wellington isn't pulling any punches when it comes to the action.

The story skips ahead after that, and we get to meet Trooper Laura Caxton, a seemingly normal, dedicated State Trooper who's dragged into Arkeley's orbit when a routine traffic stop opens a can of distinctly vampire flavoured worms. From there on Wellington really puts her through the wringer both mentally and physically- there are few books I've read recently where the main character is given such a rough ride, and the combination of that vulnerability and tenacity is what keeps her real and someone you care about. You can feel her aches and her exhaustion radiating from the page as she and the hardbitten Arkeley set about trying to stymie the vampires' resurgence and the rapidly increasing bodycount.

13 Bullets is the first book in the Laura Caxton series and I'm looking forward to picking the others up (oh look, it's almost Christmas...)!

You can visit David's website here
Who wrote this? Mark at 8:00 am

Oh this sounds good! I like the idea of a good proper grown up vampire read again.

I do a tween blog for girls and would love to know what is your favorite middle school book? http://www.hellokiki.mme

I liked this book too. A well needed change from all those fluffy vampire tales that I've previously read!