Research can be a sweaty business. 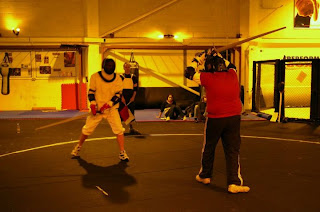 As some of you may be aware, somewhere around this time last year I came to the decision that classical/ sports fencing just wasn’t floating my boat anymore. I was still enjoying it, but nowhere as much as I wanted or expected to. I'd taken it up partly as an alternative to gym, but also as research to help me get into the mind of the main character of my fantasy novel (first draft done, edits underway, thank you for asking :) ) and to hopefully infuse my action scenes with a dynamic, credible realism.

Anyway. My eye began to rove and fixed itself on a class offering lessons with the longsword. Intrigued, I crossed my fingers and plunged into the strange and fascinating world of historical martial arts. To be brutally honest, having been poisoned by a near miss with the SCA I wasn’t expecting much beyond a few beardy part time re-enactors. What I found instead was a group of largely intelligent people with an infectious enthusiasm and passion for what they were doing, and none more so than the head honcho, Dave Rawlings. He threw me in the deep end, which was perhaps the best thing he could have done, and blew my preconceptions of medieval combat out of the water by the end of the first lesson. I'm looking at you here, Hollywood.

So there I was, barely a year later, agreeing to take part in our first club longsword competition. Dave runs a number of classes across London under the banner of the London Longsword Academy, but most of us rarely get to interact with the other classes on anything resembling a regular basis due to the constraints of modern life. Hence the competition- a chance to meet the rest of the mob.. and then fight them. A bit of competition is healthy, and sparring against someone new really forces you to raise your game.

And so it was that this Sunday past I found myself packing my stuff into my kitbag and heading out the house to cross swords with who knows how many strangers when by all rights I should instead have been ensconced on the sofa finishing Deliverance Lost. It’s a strange world I live in.

Having squeezed the car into a quasi legal parking space I joined about 30 others at a gym in Hither Green and jotted my name down on the roster. There were a few faces I recognised, having met a few others at other classes I’d gone in on when I’d missed my regular Tuesday night slot, as well as some I’d sparred with at Fightcamp and other events. Everyone seemed to be equal parts excited and nervous, but the atmosphere was friendly. We filed inside and quickly thawed under the rather large, chipshop like heaters (which were soon switched off when the fights started!).

Dave had enlisted the support of the School of the Sword to help with the scoring, but they’d been delayed by the evil machinations of their SatNav, so a few of us took the opportunity to do some light sparring while the circle was being chalked out, a good way to shake the Sunday lethargy from our limbs and generally loosen up, even if it did cost me a small but annoyingly painful bruise on my knuckle within the first few seconds (thanks Toby). However, soon enough our guests arrived and we divided into pools under Dave’s directions, each one a mix of both sexes and folk from each of his classes. Then it was time to take a seat while the first pool readied themselves for the opening bouts.

The fights progressed smoothly, with Dave doing most of the refereeing and the line judging shared by a selection of members from other pools. The scorekeeper kept things blessedly clear and simple and there was little delay once things got moving, with plenty of hands willing to help people in and out of the coloured shirts and various bits of protective gear. The fights themselves were as much of a mix as the participants and were generally a pretty good match in terms of ability. The one thing they had in common was fantastic sportsmanship- there were no egos butting up against each other as we were all there of our own choosing and because we enjoy what we do.

My pool was last to fight, and my stomach instantly knotted itself into a pretzel when we moved into the staging area and started getting ready, courtesy of that primal part of the brain that refuses to recognise a friendly fight and prepares for the worst even if you don’t want it too.

It all changed as soon as I stepped into the circle though. No more worries, no more nerves, just the game at hand. The fights were only two minutes long- to those outside the circle anyway. Inside, it felt far longer. Suddenly it was over, and the nervous grin that had been there before was gone. It’s like the build up to a theme park ride you’ve never been on. You’re beset by doubts as you inch closer to the point of no return, but once it’s over you’ve got a fat smile across your face and all you want to do is get back on and do it again. And that’s what it was like.

Unfortunately I didn’t make it into the next round (insert excuses here!) and the fights that followed between each pool’s top scoring competitor were well fought, with flurries of good techniques exchanged until a winner emerged to collect his well deserved laurels and prize. Once the congratulations and thank you's were done, a vote was taken as to whether we should we do this again- the answer being an uncontested YES.

If you’re interested in finding out more, why not contact Dave and arrange to visit one of his classes?
Who wrote this? Mark at 8:00 am

An excellent post. I spent several years learing historical rapier techniques and can echo what a fantastic sport western martial arts is.