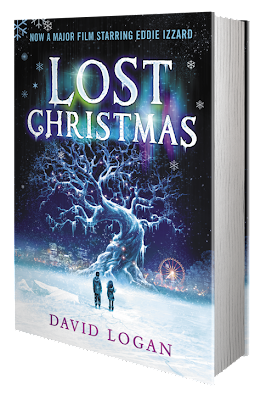 Eleven year old Goose is lost. It's Christmas, his parents are dead and now his dog Mutt has gone missing. Those around him aren't doing much better: his Uncle Frank's wife has walked out on him and his nan is losing her mind.

But then Anthony appears - a man who seems to know everyone's secrets but nothing at all about himself...

I'd been keeping Lost Christmas aside until mid- December as a pre-Christmas thing. Maybe it was a subconscious premonition that work was going to leech any kind of Christmassy spirit out of me as the usual Christmas deadlines loomed. Even just looking at that gorgeous, glittery cover is enough of a Yuletide palliative.

But what's it like? Is it fun? Is it Christmassy on a scale that Buddy would approve of? These were all important questions that needed to be answered

LC opens with Goose waking up on a crisp Christmas morning in Manchester to discover that his parents have bought him a puppy for Christmas; for a bitterly short time it's a perfect morning. Then his dad gets called in, and one cruel twist of fate later both he and Goose's mother are killed in a car accident as she's driving him to work.

The story skips a year ahead, and we meet a very drunk Frank as he staggers home from the pub that's become his home away from home. As he weaves his way down the street even he can't miss how the lights around him are acting strangely, and as they clear he sees an oddly dressed man in the street. A man he would've sworn wasn't there a moment ago, and who seems as perplexed as he is about this. After a brief meeting, they part ways.

While Frank is stumbling through his first meeting with the mysterious Anthony, a very different Goose is breaking into a house, from which he steals a gold bangle, adding it to the stash that he's going to show his fence- Frank. It's the first link in a chain of events that will bring the three of them together and in the process reveal how one person's actions can impact on the lives of those around them.

David Logan is a screenwriter, something which is apparent in the how lean the writing is and how quickly the characters are established (and happily they remain distinctive throughout). Take Goose's nan as an example- she doesn't play a particularly large role, but even so she's such a sweet and lovely character that you can't help but feel sorry for her and cheer when she helps Goose out of a bind with the local cops. Goose and Anthony are the stars of the show though. Goose with the tough, uncaring wall he's built around himself, through which we're allowed glimpses of the wounded boy beneath, none more so than when his beloved Mutt vanishes- his pain and the whirlwind of emotions that it drags to the surface are very real. And then there's the enigmatic Anthony, a man with no recollection of who he is or how he came to be in a snowy Manchester on Christmas eve, but who discovers a gift for seeing into the lives of anyone he touches, but at a terrible cost.

The story's set in Manchester, but it's a fairly neutral flavour of urban landscape that comes through. But I think that's actually a good thing, as it means most of us will be able to identify with what is described, most of which have become standard features of contemporary British cityscapes.

The story gallops along at a fair pace (it all takes place on Christmas eve- huzzah!) once Goose and Frank have a glimpse of Anthony's strange talent, which also raises the question of who, or what, is he? I had my theories (none of which were on the money, as it happens) and as things started coming together and building to the finale I wished I was reading this at home rather than on my commute as I suspected I'd be missing my stop.

I had been scratching my head at how David was going to wrap this all up, although I'll happily admit I was having too much fun reading it to worry too much. That's the thing about Christmassy themes- you know it's going to end well, and you're happy to buy into it, to suspend the cynical disbelief that you've armoured yourself with throughout the year, and enjoy the gentle torture of seeing things seemingly getting worse until it's time for the Hell Yeah. It's part of the tradition and the magic- it's a time when you're allowed to watch a movie you might have seen half a dozen times already, or re-read a dog eared old favourite just to get a fix of guilt free feel-good.

That's what Lost Christmas delivers- a warm and touching message of hope and salvation without being schmaltzy. It forced me to swallow a rather embarrassing lump in the throat to stop myself from panicking fellow commuters by blubbing like a lost child. I walked home from the station buoyed by an unexpected sense of bonhomie and then proceeded to drape fairy lights across the lounge and dining room. 'Nuff said, really.

It is logical? Nope. Are the why's and how's answered? Not really. Did I care, and should you? Hell no. Would Buddy approve? Hell yes. Go pick something off one of those interminable literary prize lists if you want deep and meaningful.

This is Christmas, and I like it just the way it is.

Lost Christmas is the novelisation of the movie (starring the marvellously talented Eddie Izzard) which will be airing for the first time on Sunday 18th December on BBC 1 at 17h30.

I think Lost Christmas is one of the things on telly this festive period that I'm looking forward to the most despite knowing very little about it. Reading this review has made me look forward to it even more :)