The Uninvited by Tim Wynne-Jones 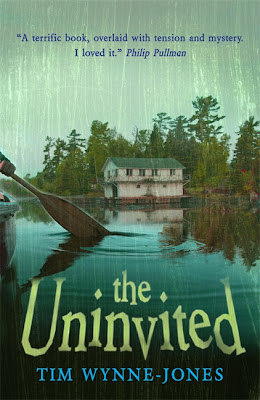 Who is the uninvited? This new page-turner from a master of suspense plumbs the unsettling goings-on at a picture-perfect cottage in a Canadian backwater.

Mimi Shapiro had a disturbing freshman year at NYU, thanks to a foolish affair with a professor who still haunts her caller ID. So when her artist father Marc offers the use of his remote Canadian cottage, she's glad to hop in her Mini Cooper and drive up north. The little house on the snye is fairy-tale quaint, and the key is hidden right where her dad said it would be, so imagine her surprise when she finds someone living there - Jay, a young musician who doesn't even know Marc Shapiro. Jay is equally startled to meet Mimi, and immediately accuses her of leaving strange and threatening tokens inside: a dead bird, a snakeskin, a cricket soundtrack in his latest composition. But Mimi has just arrived, so who is responsible? And more alarmingly, what does the intruder want?

It was after the recent Walker blogger brunch that I hit Foyles with Darren from Bookzone and decided to pick up a copy of The Uninvited. It's been on my radar for some time now but after receiving a copy of Tim's newest novel - Blink & Caution - I wanted to see what he had been up to in the past.

We meet Mimi as she's zooming along in her little Mini Cooper, away from New York into Canada's wilds, to the house her father has there. She's a little bit over the top, a little bit selfish, a little bit manic pixie girl, but once she gets to the house and discovers someone else, Jackson, already living in the house her attitude changes perceptibly. Gone is the frivolity and we meet a more mature interesting girl who likes an ordered world, even if she doesn't really think she does.

In Jay we have a great male character. I genuinely liked him and thought that the author took great care to establish him as co-main character. He has depths and is as layered and lovely as Mimi.

Their first encounter of each other in the house is superbly written, with a lot of subtext and undercurrents and it is as their meeting continues and they put two and two together and get six, that I fell for Tim Wynne Jones' writing in a big way.

Before I go any further, I'd like to point out that this is not a contemporary romance, although it is very much about relationships and the shifting tides of relationships, family and friendship.

Jay shows Mimi his computers and set-up in the loft of the little house on the snye and has her listen to some of the music he's been recording. He explains to her how he thinks someone has been tinkering with the music, laying down tracks over it - crickets chirping and loud breathing. Not just that, but there have been weird "gifts" left for him too. They try and puzzle it out, blissfully unaware of the fact that they are being watched by the person who has been sneaking into the house.

Things worsen when they look at Mimi's video recorder and notice that someone had tampered with it, filming them as they were talking by the window of the house. The realisation that they were being watched so closely freaks them both out and they set about securing the house against intruders.

Mimi and Jay's relationship is so complex, within minutes of meeting and talking, that it forms the steady foundation of the novel. Mimi is invited to meet Jay's two mums and she gets along with them famously. They welcome her with open arms, accepting her into their small family. This too, I liked. The mums were equally well-written and the story of how they fit in with Jay and Mimi is done so well - just perfect. I did however think that I would have liked to spend more time with them as they formed such a dynamic couple.

I am obviously being very sketchy about the storyline because really, you want to read it and discover it for yourself. It does, with one of the last reveals, stretch the boundaries of belief quite a bit but in the end, because of the author being so good at what he does, you completely fall for it.

There are several elements of odd and creepy and there is a sense of the supernatural in several instances, but it is wholly a very contemporary story set within the here and now. There is enough shivery happenings though to keep thriller readers entertained.

There are so many components to this story and it so well plotted with rich storytelling and scene setting that The Uninvited has immediately become one of my favourite books of 2011 even though it's been published back in 2010.


I'd like to add that The Uninvited is aimed at the upper YA range. Both Mimi and Jay are out of high school and in university. Their story has a more mature tilt to the standard YA contemporary novels I've read but I hasten to add that it would be completely suitable for readers who are comfortable with bigger themes and concepts.

The Uninvited is out now and Blink & Caution by Tim Wynne Jones is out January 2012. Look out for online buzz about it and be sure to check out Tim's website here.
Who wrote this? Liz at 9:27 am

I like the sound of this a lot, particularly the target audience.

what is the theme of this book about.