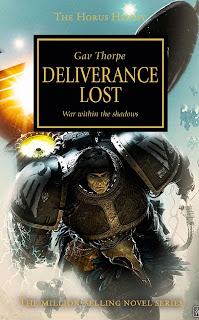 As the Horus Heresy divides the Imperium, Corax and his few remaining Raven Guard escape the massacre at Isstvan V. Tending to their wounds, the bloodied Space Marines endeavour to replenish their numbers and return to the fray, taking the fight to the traitor Warmaster. Distraught at the crippling blow dealt to his Legion, Corax returns to Terra to seek the aid of his father – the Emperor of Mankind. Granted access to ancient secrets, Corax begins to rebuild the Raven Guard, planning his revenge against his treacherous brother primarchs. But not all his remaining warriors are who they appear to be… the mysterious Alpha Legion have infiltrated the survivors and plan to destroy the Raven Guard before they can rebuild and threaten Horus’s plans.

The Raven Guard and the Alpha Legion in one book. Yes please.

Deliverance Lost picks up from the groundwork laid by the Raven’s Flight audio drama, and while they compliment each other, both work equally well on their own. It begins in the aftermath of the infamous Dropsite Massacre, when those Legions who had sided with Horus turned their guns on their erstwhile brothers in open combat for the first time. The Raven Guard were there, and suffered enormous, traumatic losses in the opening battle. The few thousand who survived fled across the mountains of Isstvan, harried by the traitor legions at every turn until a daring rescue is enacted, their remaining ships braving the stellar blockade to snatch the survivors and their primarch Corax away.

This is the story of what happened after Corax and his surviving legionaries escaped- and the escape itself is a well crafted bit of interstellar cat- and- mouse. The effect of that shocking betrayal isn't glossed over, and Space Marine or not, those who survive can't escape a measure of survivors guilt and it's clear enough that had they not been Space Marines, chances are that they would have have spent the years ahead getting over varying degrees of post traumatic stress rather than plotting their revenge. While their armoursmiths work around the clock to bring them back to battle readiness, Corax turns their remaining fleet towards Terra to report to the Emperor in person, and seek his counsel. It’s not an easy meeting, for this is in the wake of Magnus the Red’s sorcerous intervention and the Emperor is fighting his own war against the denizens of the warp. If you’ve read The Outcast Dead, you’ll benefit from having an understanding of the mood on Terra when the Raven Guard arrive. Having been granted access to a carefully guarded secret, Corax and his survivors return to Deliverance to prepare the Raven Guard for a new generation of Space Marines. Corax’ origins and the history of Deliverance is drip fed throughout, which works quite well as it doesn’t clutter up the main plot. I would have liked to have seen more of the Raven Guard in action myself- I like their hit and run philosophy and general attitude, but it's not a deal breaker.

When we attended Black Library Live last year, one of the question posed to the authors was what was your favourite Horus Heresy novel so far; the answer was Legion, the story of Alpharius, Omegon and the Alpha Legion. Masters of deception and misdirection, the Alpha Legion follow their own agenda, and this mission is no exception. Having adopted the faces and memories of fallen Raven Guard, they’re simply waiting for the right moment to act. Most of their ‘screen time’ is from the perspective of one the infiltrators (called Alpharius, oddly enough), and while his loyalty to his own Legion is unquestioned, he can’t help but feel a camaraderie with the squad he’s part of. He’s a likeable character, even though you know that at the end of the day he’s going to have be a real bastard.

Knowing that Alpharius and his fellow Alphas are closing in creates a nice undercurrent of tension as Corax forges ahead with the technology that the Emperor has granted him. When the Alphas play their hand, it’s a cleverly orchestrated setup that really exemplifies their ‘outside the box’ approach to warfare.

Despite the relative paucity of blazing bolters, DL reads very quickly and doesn’t suffer for the lack thereof. There’s more than enough anger, revenge betrayal and honour going on in there to hook you and keep you turning the pages, and it ends on the same kind of note as the “Let’s hunt some orc” scene from the Fellowship of the Ring. I really enjoyed it- it’s a solid, all round addition to the Horus Heresy series, which only seems to be getting better with each instalment.

You can read an extract here and visit Gav's website there.
Who wrote this? Mark at 8:00 am