The Ghost and the Goth by Stacey Kade 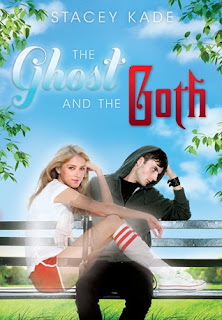 Synopsis
Alona Dare–Senior in high school, co-captain of the cheerleading squad, Homecoming Queen three years in a row, voted most likely to marry a movie star… and newly dead.

I’m the girl you hated in high school. Is it my fault I was born with it all-good looks, silky blond hair, a hot bod, and a keen sense of what everyone else should not be wearing? But my life isn’t perfect, especially since I died. Run over by a bus of band geeks—is there anything more humiliating? As it turns out, yes—watching your boyfriend and friends move on with life, only days after your funeral. And you wouldn’t believe what they’re saying about me now that they think I can’t hear them. To top it off, I’m starting to disappear, flickering in and out of existence. I don’t know where I go when I’m gone, but it’s not good. Where is that freaking white light already?

Will Killian–Senior in high school, outcast, dubbed “Will Kill” by the popular crowd for the unearthly aura around him, voted most likely to rob a bank…and a ghost-talker.

I can see, hear, and touch the dead. Unfortunately, they can also see, hear and touch me. Yeah, because surviving high school isn’t hard enough already. I’ve done my best to hide my “gift.” After all, my dad, who shared my ability, killed himself because of it when I was fifteen. But lately, pretending to be normal has gotten a lot harder. A new ghost—an anonymous, seething cloud of negative energy with the capacity to throw me around—is pursuing me with a vengeance. My mom, who knows nothing about what I can do, is worrying about the increase in odd incidents, my shrink is tossing around terms like “temporary confinement for psychiatric evaluation,” and my principal, who thinks I’m a disruption and a faker, is searching for every way possible to get rid of me. How many weeks until graduation?
Wow, huge synopsis for this one. I was going to cut it down but it emphasises a point I want to discuss later so please forgive me. This, like Anna and the French Kiss is another book that I seemed to see everywhere. It was looming at me from the shelf at Foyles, constantly on my recommended list on Amazon and I saw some great reviews too. I finally picked up a copy and it wasn't long before I was kicking myself for leaving it so long. In fact, this is going to be a resolution for next year - to stop ignoring books that are obviously written for me!
Alona is a cheerleader and pretty much the top of the pack when she gets run over by a bus. Will is the school freak, he can speak with the dead but obviously it's a skill that doesn't really help his social standing at school. It doesn't take long for Alona to realise that Will can see her however neither Will or Alona are fans of each other. Both of them have their own set of prejudices about the other and I enjoyed watching them get gradually broken down. Will is sure that Alona is an airhead, a bitch and pretty pointless - both alive and dead. Alona is fairly confident that Will is deliberately socially inept, crazy and determined not to fit in. Once she discovers his odd talent she has a new found respect for him and also organises for the crowd of school ghosts to leave him alone for a while. Will has to grudgingly admit that Alona is more than just popular and pretty.
In return Alona needs Will to explain how to be dead and help her stop disappearing. As time progresses it becomes obvious that they should work together. In fact, they both need to start getting on rather than merely tolerating each other. I loved the strength of Alona and Will's voices - they were both so distinct and I could have told them apart even without the chapter headings as you can see from the synopsis. The book fairly zips with humour too from both main characters - really, it was a joy to read. Principal Brewster is so completely odious that I defy anyone not to be immediately rooting for Will to overcome his problems. Alona could have come across as a little cold and brittle but as she watches her best friend get together with her boyfriend and spends her nights curled up on her dad's sofa I felt an urge to protect her. Her levels of concentration and organisation that has kept her covering up a family secret are impressive and I knew that once she had decided to help Will she'd be unstoppable.
I loved this book - the school politics, elements of romance and mystery meant that I whipped through it and can't wait to read the next two.
Who wrote this? Essjay at 7:30 am

Email ThisBlogThis!Share to TwitterShare to FacebookShare to Pinterest
Labels: hyperion books, stacey kade, the ghost and the goth

I love the synopsis of this one. This is definitely the type of book I would read. Shall add to my Wishlist..

Like Vivienne I love the sound of this so much.

Usually I run a mile from paranormal YA, but this sounds original and intriguing. I'll keep an eye open for it.

I have to tell you. I have had this book on my wish-list FOREVER but after reading your review a few weeks ago. I snuck a copy in with the girls Christmas shopping. Shhh don't tell anyone ;D