Every Dead Thing by John Connolly 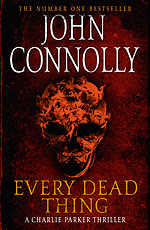 Homicide cop Charlie "Bird" Parker was drunk when the killer known as the Travelling Man dissected his wife and his daughter. Parker's guilt and obsession with revenge have taken him well beyond the law, causing him to beat a pimp to death and accept the friendship of a notable hitman. Yet his old colleagues know that any one of them might have gone down the same path, in the same circumstances, and they and FBI man Woolrich still find him and his obsessions useful. Leaving mayhem and destruction in his wake, Parker finds every private investigation he takes leading him back to his family's killer--is this an obsession, or is he treading a maze of murder built just for him? And can the obsessed Parker accept the love of a bright woman pathologist without wrecking her life as well? Small Virginia towns with guilty secrets, the drugs deals that unite smart New York society with the madness of a decadent Mafia dynasty, the very different gang wars of New Orleans and the mysteries of the Louisiana swampland--this is an intelligent book packed with puzzles, characters and brilliantly visualised locations that most thriller-writers would have spun out for a series.


The above write-up is straight from Amazon by Roz Kaveney and you know, I couldn't have summed this book up any better.


What I am however going to say is that this is my first ever John Connolly novel and I was blown away by the writing, and the intricately layered plot, bearing in mind this was his debut novel back in 1999.

I genuinely came to like Charlie Parker as a character. He is messed up, a bit mouthy, yet honest enough with himself when he's in crappy situations, knowing that invariably he's put himself in those situations through his direct actions. His motivation for doing anything is transparent and although he is a bit terrier-like when it comes to focussing on a goal, he's clever enough to see the wider picture...and then still going ahead and doing what he feels is the right thing. I like that he thinks outside the box and is a bit of a loose canon and that through all of this, he is still such a solid dependable presence.

What I also thoroughly enjoyed is Connolly's writing style. He writes, for the lack of a better description, deeply. When Charlie and his FBI mate Woolrich head for New Orleans, I had no doubt in my mind that there is where we were. We live and breathe Orleans and the swamp and the meetings with the various locals. It gets under your skin, you can feel the oppressive heat and you can see the magic of the place just under the skin. What I also liked about the writing is that Connolly gives Charlie this something extra, almost a sixth sense, a deeper understanding of what's going on. I know, it sounds odd, but there are moments that I read Every Dead Thing and it gave me chills, for instance: Charlie is travelling back to New Orleans to meet with a witch, a soothsayer, as she's asked to see him urgently.

Then, just as it seemed my head was going to explode from the pain and the pressure, I heard a voice, the voice of an old, black woman in the Louisana swamps.


And then my world turned black.

It is so well balanced, these slight almost supernatural links, throughout the story, along with the growing legend of this human killer The Travelling Man, that I utterly fell, hook, line and sinker, for Charlie's story and Mr. Connolly's writing. Reading this there is definitely a sense of "more".

Charlie isn't the only character. He has a supporting cast and they are very much all worth a mention.  Favourites are Louis and Angel who stole stole my heart - these guys may not be on the right side of the law, but you know you want them on your side when bad things go down. And through loyalty and friendship and honour, they are by Charlie's side when he asks them for help. They step up to the plate, do what's been asked of them, then quietly disappear. Genuinely, my reading experience was made richer for these two characters' appearance.   Also, they are so bloody cool!

I have no idea what happens in the other Charlie Parker books and I am content not to, because I will be savouring each one in the next few months as I've come to realise that I can't not read them. I mentioned that I was reading John Connolly on twitter and how much I was enjoying the writing, the action, the characters, just all of it, and had a tranche of friends and strangers talk to me about John Connolly and Charlie and how great his books are. As if I needed more convincing!

In other words, cutting to the bone of the matter: John Connolly's Every Dead Thing is definitely worth the ££. Satisfying and clever writing. I'm putting the rest of the books on my goodreads and Amazon wishlist.

There is an excellent Q&A on John Connolly's site about Every Dead Thing.  It's a bit spoilery but I had to go and read it to find out what made him write the book and what went in to creating Charlie Parker.
Who wrote this? Liz at 8:11 am

I read this book earlier this year and am now on book 4, The White Road, which I was fortunate enough to get John himself to sign on a visit to our local Waterstones. Like you I loved the complexity of Charlie Parker and the fact that he is definitely not stupid and as you say "sees the wider picture". I also love Louis and Angel, and with every book you read, you learn to love them more. Can I suggest you read The Book of Lost Things, also by John Connolly, completely unrelated to the Charlie Parker series, but believe me you will not be disappointed.

After reading your tweets about this book I've been looking forward to your review, you already know you've sold me on the idea of it :)