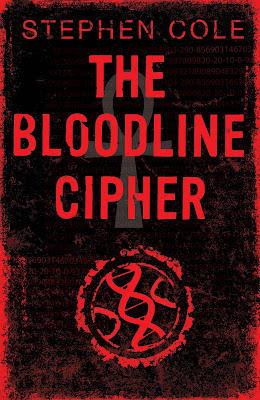 This is my first introduction to a book by Stephen Cole and I have to say it is a rollickingly good read.


Intended for an YA audience, the book sweeps you along at a cracking pace. The writing is good, down to earth and it is an easy read.


The characters are fun with some moments of brevity. They are all young thieves and outlaws, working for a dubious character called Coldhardt (what a fantastic name!) and like Charlie's Angels they are get sent out on missions. Only thing is, there is nothing sunny and fluffy about this lot.


This is the book synopsis cripped from Amazon:


Jonah and the rest of the elite team of teenage thieves have been sent on a mission by Coldhardt to retrieve an ancient grimoire. He believes it to be a magical book of the law of the dead. Something like that could fetch a very good price in the right market. But when they go in to get it, they discover another team of thieves has beaten them to it. Even more disturbingly, this team is better trained, and better informed. It seems Coldhardt's old mentor, a man he thought was dead, is not only very alive, but has a highly efficient rival organisation, and a devilish plan to wipe out Coldhardt. Only the best will make it. In a thrilling adventure with brilliant plotting and fiendish twists, join Jonah faces his toughest challenge yet - but will it be his last?


There are guns, chases, explosions, exploding eyes (I kid you not) crossbows, murder, death, mayhem. Why this series hasn't been picked up to be turned into a mini-series is beyond me. It will appeal to a wide range of audience, not just teens. There are gadgets, gizmos, intrigue, smoldering girls and did I mention fire and explosions?

This is the third in the series, with Thieves Like Us and The Aztec Code preceding it - but having said that, it works on a completely standalone way too as you get caught up pretty quickly on the various characters - but in a clever non-preachy kind of way, so kudus to the author on that score.

The rival gang that appears on the scene is not at a nice bunch at all and offer an interesting and rather brutal counter-point to Jonah's crew who are all very focussed but completely taken unawares by the rival gang's appearance and their brutality.


Personally I love the Nathanial Coldhardt character as he has tremendous scope, with enough of an enigmatic persona to make you think he could grow to easily become a Bond villain...with a plot that might actually work and not one to be easily stopped either.


This is for fans of the young Bond series, Alias, Kyle XY and the Alex Rider series of books.
Who wrote this? Liz at 5:21 pm

Thieves like us is a fantastic book. I want the Aztec code and and the Bloodline Cipher

If you like the books a lot well I made a discussion site for the series I will post a link here for all to see.