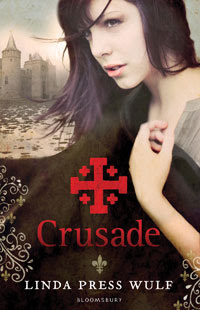 Synopsis
Robert: Left on the steps of a church as a baby, Robert was often hungry but never stole food like the other orphans in town. Introverted and extraordinarily intelligent, he knew all the Latin prayers and hymns by heart by the time he was five years old.

Georgette: Her own mother died in childbirth, leaving Georgette with a father who, seventeen at the time, had neither experience nor aptitude as a nurturing parent, and a brother known in town as Le Fuer – The Spitfire – for his terrible temper.

Perhaps to replace something missing from their own lives, both Robert and Georgette are drawn to the news of a crusader, twelve or thirteen, no older than themselves, travelling down through France with thousands of followers – all, unbelievably, children too.

Of those thousands, this is the incredible story of two. A story of hardship, loss and of love.
Crusade isn't the sort of book I normally read but I fancied a change and, to be honest, picked it off my reading pile on the strength of it's gorgeous cover. I also know nothing about the Crusade but at the end of the book is a brief description of the events which was extremely helpful. However, don't read this first as it'll ruin the story! All the way through I was so amazed by events that I kept asking myself if they could possibly be true. So, aside from my poor knowledge of the era what's it like? Intriguing is a good word. I had a great deal of questions as I read but not all of my questions were answered.
We meet Robert first, a child who has been badly scarred in an accident and a village outsider as a result. He lives at the church and is whisked away by a visiting abbot who recognises that Robert is an unusually intelligent child. Next we meet Georgette, a sweet village girl who has secretly been taught to read and write by the local priest. Both Robert and Georgette have strong and pure religious beliefs. One day a charismatic boy called the Prophet Stephen arrives at the village and rouses the children with his speech that they must travel to Jerusalem and, "free," the holy lands. Inspired, she sets off with her brother. Later along the road they stop at an abbey and Robert also joins them as do thousands of other children along the way.
Both Robert and Georgette have a strong belief and are horrified by what they see along their journey. The story is partly an historical fiction and partly a kind of coming-of-age story. They meet kindness and cruelty along the way from both outsiders and their fellow Crusaders. Prophet Stephen has promised that when they reach Marseilles the sea will part to enable them to continue their journey on foot. The story changes and becomes something else when they do reach Marseilles and I was surprised by some of the choices that the characters made. I don't want to spoil what happens next but the story then becomes more about Robert and Georgette and the buds of religious change that happen at this time.
I'm curious to know if there will be a follow up to this story as I feel that there's more to tell. I hope so anyway as I'm eager to know what happens next. In fact, there's much more to be told. Some characters disappear without a fanfare and I wanted a bit more of a resolution. Nonetheless, I'd highly recommend Crusade as a book full of drama and high stakes.
Who wrote this? Essjay at 7:30 am

This sounds quite different. Might be interesting to read :)

Do love a bit of drama. I will look out for this. I had not heard of it before.