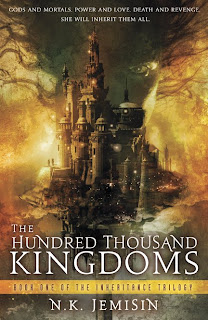 Yeine Darr is heir to the throne of the Hundred Thousand Kingdoms. She is also an outcast. Until, that is, her mother dies under mysterious circumstances.

Summoned by her grandfather to the majestic city of Sky, Yeine finds herself thrust into a vicious power struggle for the throne. As she fights for her life, she comes ever closer to discovering the truth about her mother’s death and her family’s bloody history – as well as the unsettling truths within herself.

With the fate of the world hanging in the balance, Yeine will learn how perilous it can be when love and hate are bound inseparably together, for both mortals and gods alike.


I have been dragging my feet on writing this review for ages. And ages. Maybe a month of procrastination and displacement activity - I've tidied, I've read, I've reviewed other things...but not this one.

This one is a major problem for me. Can it be that you enjoy a book too much? That although your brain tells you that it's not the most perfect book ever written, your heart over-rides it and tells you that yes, it is. Well, see, that's my conundrum. I've spoken to Gav at Nextread about this, I've even spoken with Ana at Booksmugglers about it. I don't know what it is about The Hundred Thousand Kingdoms that's gotten under my skin - I can't stop thinking about it either, the characters and story line, specifically.

Firstly, our main character Yeine is by all counts not spectacularly beautiful or vastly talented in magic or anything we'd have become used to in the normal fantasy fare. She's small, has brown skin and dark hair, cut short to her scalp. Her people are fighters and are looked down upon by practically everyone else in the Hundred Thousand Kingdoms and they are seen as uncouth and barbaric. This actually doesn't bother her all that much, because through her story we realise exactly who the barbarians truly are.

The novel is written in an almost conversational style. It gives the reader the impression of an immediacy and intimacy that is startling. The world building is excellent - you suspect that the tip you see is only a miniscule amount of what the author has stored away in folders and that's the part that I loved - there were no extraneous bits thrown in. The story was the story. Pared down, solid, interesting.

As I started reading The Hundred Thousand Kingdoms I initially thought that maybe the editor had made some kind of mistake because there were some sections that were told in a different voice, and it was a dreamy, hypnotic voice. But THEN I figured it out.


I am not as I once was. They have done this to me, broken me open and
torn out my heart. I do not know who I am anymore.

My people tell stories of the night I was born. They say my mother crossed her legs in the middle of labor and fought with all her strength not to release me into the world. I was born anyhow, of course; nature cannot be denied. Yet it does not surprise me that she tried.


See what I mean? This is how the book starts. How could you not be drawn in to wanting to know who the speaker is? Either one of them? Was our narrator insane, did the editor screw things up, what was going on here? As much as I liked this, it also worried me. A reluctant reader may very well left the book to the side as the author has done something very different here - starting at the end, going backwards and forwards in the narration, interspersing it with personal asides from the dream-voice. Before this puts you off, I'll prompt you to try it, to stick it out and see what happens!

Determined to stick it out, I plowed ahead. Yeine's journey from the North to Sky and her grandfather's court, is covered briefly and swiftly at the opening of the book. She's being brought to the tower and the city to become her grandfather's heir. He already has two other heirs, her two cousins, and to be honest, I felt that Yeine should have walked away completely as it was a nightmare situation. One cousin was perpetually drunk and in a state of high anxiety whilst the other was a ruthless and ambitious harpy set to destroy everyone in her path to becoming the ruler of Sky.

The Arameri - the ruling clan which Yeine now belonged to as a full-blood - has a hierachy: those who are Quarter, Half and Full Bloods. The Quarter and Half-bloods are servants to the Full Bloods and well, the Full Bloods are pretty twisted. They also control a group of gods whom they treat as slaves.

It's not unusual in fantasy to have gods featured prominently within a society, but you've not seen gods treated quite this way. They are almost indentured servants, forced to do their handler's will, with very little to no free will of their own.

There is a lot of story to tell in The Hundred Thousand Kingdoms. It's strong, it's solid, it works for me.

So instead of reading my no doubt dull review, pop by Graeme's blog and also The Booksmugglers to read more coherent reviews on this excellent novel and then go out and buy it. Read it, and come back and tell us what you think!

I really enjoyed your review, Liz. Not boring at all :) I am so, so tempted to by this book!

Sounds fabulous. I have read the Booksmugglers review but it is always nice to read other opinions and, having read yours, it feels as if I should own this at once!

The cover attracted me first, but your review has gained my interest. Definitely one to add to my wishlist.